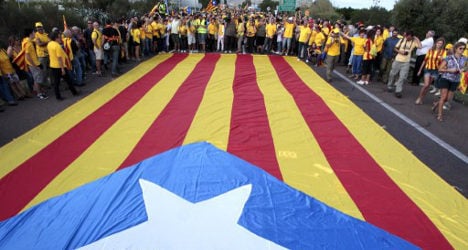 At the same time, some 46.4 percent of people in Spain think Catalonia should lose its powers of self-government if the region's referendum of self-rule goes ahead.

A total of 37.6 percent of people interviewed opposed the move to scrap those regional powers, the pollsters found.

Spain is made up of 17 self-governing regions (comunidades autónomas) with wide-ranging powers over spheres including health, tourism and the environment, among others.

But the Spanish Constitution allows for the central government to strip regions of those powers if they do "not fulfill the obligations imposed upon it by the Constitution or other laws" or "acts in a way that is seriously prejudicial to the general interest of Spain".

Monday's El Mundo poll found support for such a drastic move is very high among supporters of Spain's conservative ruling Popular Party (65.6 percent), while 35.4 percent of opposition voters would back the proposal.

Among voters aged 18 to 29 it was almost a dead heat with 45.3 percent in favour of Catalonia losing its regional powers and 45.8 percent against.

The poll comes after the regional government of Catalonia announced in late 2013 it planned to hold a vote on the issue of independence for the region.

Proud of their distinct language and culture, many of Catalonia's 7.5 million citizens resent the redistribution of their taxes to other regions and believe the region would be better off it if it were independent.

But Spain's Constitutional Court in March ruled the planned vote unconstitutional, and recently the Spanish Parliament roundly voted against a petition from the region to be allowed to hold the referendum.

Spanish Prime Minister Mariano Rajoy has also repeatedly labelled the proposed vote "illegal", saying under Spanish law all Spaniards have the right to vote on whether a single region should be permitted to become an independent sovereign state.

Catalonia's regional head of government, Artur Mas said after the April 9th vote that that rejection was not "final" and the region would "seek to build legal frameworks" for the vote.