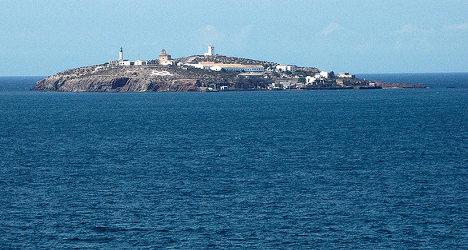 Isabel II Island, with a military barracks that houses around 30 soldiers is the only one of the three Chafarinas Islands which is inhabited. Photo: Miguel González Novo

The seven sub-Saharian immigrants are the latest arrivals on the island, one of three that make up the diminutive Chafarinas archipelago, only 3.3 kilometres (2.1 miles) off the coast of Morocco.

Only neighbouring islet Isabel II is populated — with a army garrison housing some 30 soldiers.

They "lit a fire so they (the Spanish soliders) could see them," Caminando Fronteras spokesperson Helena Maleno told the daily. Google Maps image marking the position of the Chafarinas Islands

They are all uninjured and in good health, according to the military sources.

The three Chafarinas Islands have a combined size of just half a kilometre squared. Under Spanish control since 1847, they are part of a string of Spanish islands off the cost of Morocco, including the Island of Alborán and the three Alhucemas Islands.

These islands have become an alternative entry point of entry for the thousands of immigrants hoping to enter Europe every year.

Under Spanish law, the seven immigrants in Isla del Congresso can now claim asylum in Spain, according to Spanish NGO Coordinadora de Barrios.

But NGOs fear that the seven will suffer the same fate as 73 sub-Saharan immigrants who were expelled from Isla de Tierra in 2012.

While ten pregnant women and children were transferred from the tiny island 100 metres off the coast of Morocco to the Spanish enclave of Melilla, the rest of the immigrants were shipped back to Morocco.

Spain's North African enclaves of Melilla and Ceuta have seen massive assaults on their borders in recent months. Some 30,000 people, mostly sub-Saharan Africans, are thought to be waiting in Morocco in a bid to enter Spanish soil.