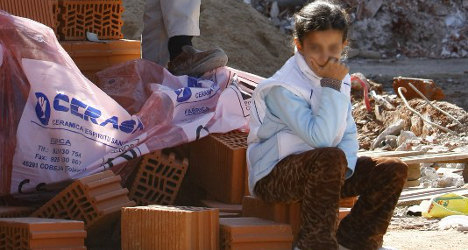 The number of under-18s in Spain "at risk of poverty or marginalization" soared to more than 2.8 million in 2012. Photo: Philippe Desmazes/AFP

"The situation is urgent and it requires urgent measures," the director of the Spanish branch of the organisation, Andres Conde, told a news conference.

The petition calls on the government to extend child benefit payments to all families living below the poverty line, increase the amount that is paid and move to monthly instead of twice-yearly payments.

The number of under-18s in Spain "at risk of poverty or marginalization" — an official EU measure of economic hardship – soared to more than 2.8 million in 2012, according to the charity.

That was equivalent to 33.8 percent of Spain's children, it said in a report published in January that used the latest official European Union data. Within the European Union, only Romania had a higher level.

The charity cited cases of children whose daily diet consists of bread, cheap luncheon meat, eggs and potatoes and of children who go to school without any textbooks because their parents can not afford them.

"Spain's social spending is very low, one of the lowest levels in Europe. These low levels are associated with a lack of a political strategy centred on children to tackle child poverty," said the charity's EU representative, Ester Asin Martinez.

Spain's conservative government, which took power in late 2011, imposed tough public spending cuts in its efforts to stabilize the public finances, under pressure from European authorities.

The country began in the third quarter of 2013 to crawl out of its second recession in five years. The double downturn threw millions out of work after the collapse of a building boom.