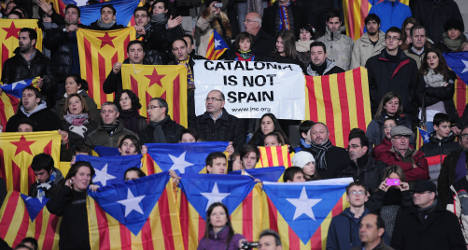 The EU will end up accepting an independent Catalonia as a member state because political and economic arguments hold more sway than Spain's veto right.

That's the upbeat argument put forward by pro-independence advisers in a report which is part of a series looking at the future of the region.

The report comes in response to previous statements by the EU and Nato that Catalonia — which has more people than Denmark and an economy rivalling Portugal's in size — would be excluded if it broke away from Spain.

The document prepared by Catalonia's National Transition Advisory Council examines four possible outcomes for the region if it chose to declare independence.

In the first scenario, Catalonia would be automatically accepted into the EU. The second scenario would see the newly independent state temporarily outside the union, before rapidly rejoining, with EU law still in force in the interim.

The third possible option would involve Catalonia joining the queue to become EU members, along with countries like Iceland and Turkey while the final possibility would see Catalonia outside of the EU.

But the National Transition Advisory Council is putting its weight behind the first option.

The Catalonia situation is not expressly addressed by EU or international law, the authors of the new report argue.

More critically, the 28-member union has generally been "extremely flexible and pragmatic when if comes to solving unforeseen problems", the report argues.

"The big issue is not a legal one. The question is not about expulsion (from the EU) but how and when to convert Catalonia into a State with full legal rights," the man behind the report, Carles Viver Pi-Sunyer, was quoted as saying in Spain's El País newspaper.

"It doesn't seem logical to make Catalonia leave (the EU) so that they can come back in," he added.

The report into the legal position of a hypothetical independent Catalonia comes in the wake of a vote in the Spanish Parliament rejecting a petition by the Catalan Government to be allowed to hold a referendum on the issue of independence on November 9th.

After a seven-hour debate, 299 members of parliament voted against the request by the Catalonia region to be granted the right to call a referendum while 47 supported the petition and one abstained.

Spain's Constitutional Court ruled last month that a region like Catalonia could not "unilaterally" call a referendum on its sovereignty.

But the Catalan government argues that a 2006 Catalan autonomy statute which was passed by Spain's parliament granted the region the power to hold referendums.

Regional president Mas, has always vowed to remain within the law and he stressed after the vote that the April 9th rejection was not final.

"From this painful 'no', the Catalan institutions will seek to build legal frameworks, and there are several, allowing for this November 9th ballot to take place," he said.

Mas has also threatened to call snap regional elections as a form of plebiscite on the struggle for independence.

To see the full report (in Catalan) click here.