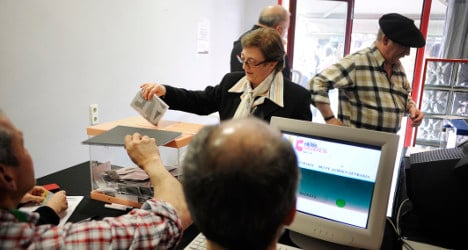 A person votes in an unsanctioned referendum organised by the A13 platform on Sunday in the Spanish northern village of Etxarri-Aranatz. Photo: Ander Gillenea/AFP

Voters in the town of Etxarri-Aranatz voted overwhelmingly in favour of independence in the ballot which has no legal standing.

Asked "Would you be a citizen of an independent Basque Country?", 804 people said yes, while 18 responded in the negative. The remaining ballots were left blank.

The organizers of Sunday's vote, the citizens group A13, said it was "a great deal for people who wanted to practice democracy, they were given a chance to express themselves and had accepted".

While Etxarri-Aranatz is in Spain's Navarre region, the Basque language is widely spoken, and many resident see themselves as Basque.

Sunday's vote comes in the wake of a recent vote in the Spanish Parliament on whether Spain's Catalonia region should be allowed to hold a referendum on the question of independence.

Spain's MPs overwhelming rejected the motion, with 299 voting against and 47 voting in favour of the motion. MPs from Basque nationalist parties were among those who supported the proposed poll.

Backers of the poll have vowed to push on with the poll planned for November 9th.

Spain's Basque region has a distinct language and history from the rest of Spain, and from Catalonia.