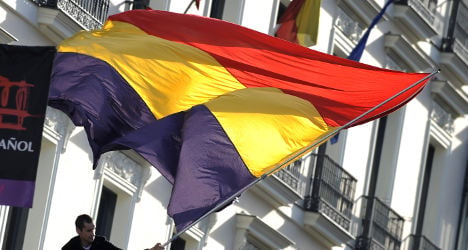 The marches — including one in central Madrid — are being organized by Spain's State Republican Group which includes around a hundred member associations.

Demonstrators bearing the distinctive red, yellow and purple civil flags of the Spanish Republic will call for a 'third Republic' for Spain and a new constitution which doesn't include the monarchy.

Organizers say Spain's current bipartisan model has failed with both parties "marred by corruption". They also argue the country's 1978 constitution has now reached its use-by date.

Spain's current democratic constitution was implemented after the death of Spanish dictator Francisco Franco who ruled the country from the end of the country's Civil War in 1939 to his death in 1975.

An integral part of Spain's so-called "Transition" period, the 1978 constitution named the King of Spain as the country's head of state.

Some 88 percent of voters approved the new Spanish Constitution in a 1978 referendum.

King Juan Carlos won widespread respect for his role in restoring Spain's democracy but a series of scandals have taken the shine of the country's royal family in recent times.

The king's youngest daughter Cristina and her husband Iñaki Urdangarin are embroiled in a long-running corruption case involving alleged embezzlement of €6 million ($8.3 million) in funds from a charitable sports foundation.

The monarch himself was also criticized for participating in a luxury elephant hunting trip during the country's deep economic crisis.

Monday's pro-republic marches coincide with the commencement of Spain's Second Republic on April 14th 1931. That regime officially ended when Franco came to power in 1939 at the end of a bitter civil war in the country.