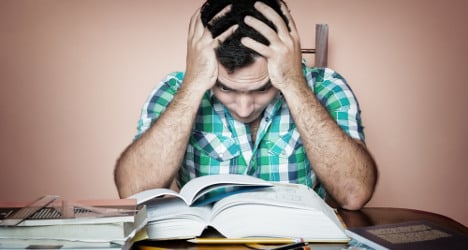 For the third year in a row, Spain has come top of Europe's school dropout table.

In 2013, 23.5 percent of people aged 18 to 24 in the country had left the education system before completing compulsory education, or ESO as its known in Spain.

While this is Spain's best result on record, it is still double the EU rate of 11.9 percent, figures from the EU's stats body Eurostat released on Friday show.

Spain can also take only limited comfort from the fact the school dropout rate has come down from 31 percent in 2007.

Europe's other 'worst' performers, Portugal and Malta, have made more substantial progress.

In the same period, Spain has seen its own rate edge down from just over 31 percent to the current 23.5 percent, national daily El País reported on Friday.

But there is a silver lining to the latest Eurostat figures: a total of 40.7 percent of Spaniards aged 30 to 34 have a university qualification, several points about the EU average of 40.7 percent.

This figure, which El País puts down to the unemployment and the economic crisis, means Spain is gaining some ground on the 44 percent target set by the Spanish Government for 2020.

For high school education, Europe is targeting a 15 percent school dropout for Spain by the end of the decade.

In 2013, the Spanish Government approved a controversial new law, known as LOMCE, designed to keep people in secondary education, and get more people through university.

Pushed through by Education Minister José Ignacio Wert, the law has meet stiff opposition from many camps.

Some are angry about the replacement in schools of the Citizenship subject  — which dealt with controversial themes including social inequality, homophobia and gender violence — with the Catholic church-inspired Civil and Constitutional Education.

There is also anger about increased funding for semi-private Catholic and single sex schools.

Others in Catalonia complain LOMCE lowers the prestige of the Catalan language in the classroom.