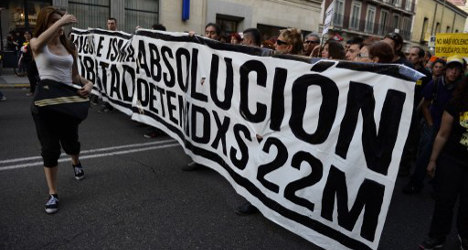 The protesters accused police of brutality during demonstrations by tens of thousands on March 22nd.

"I was pushed by the police against the wall of a luxury hotel. An older protester needed stitches to his face," said Ines Monroy, a 60-year-old museum worker, at the demonstration on Thursday.

"I am very scared to be here but I want to stop feeling scared. For my grandchildren," she added.

"No more police violence" and "Police abuse" were among the signs displayed at Thursday's protest which disrupted traffic during the evening rush hour.

Organizers said police mistreated protesters detained on March 22nd by forcing them to stand against a wall with their hands in the air for eight hours and denying them food and water for 24 hours.

They called Thursday's protest after police last week held another nine people for their alleged involvement in last month's disturbances, which was dubbed a "march for dignity".

"Police detained people in their homes and workplaces. Some of the people who they detained were not even in Madrid on that day," said Susana Cerrudos, a spokeswoman for the March 22nd (22M) movement which organised last month's the anti-austerity march.

Protesters also demanded the release of two of the demonstrators detained for allegedly causing disturbances and who are still being held.