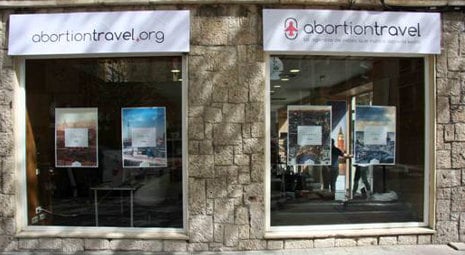 “Be free in London”, “Decide in Paris” or “Your choice in Lisbon”: just three of the mottos featuring on a ground-breaking yet made-up service. Photo: DDB

"Be free in London", "Decide in Paris" or "Your choice in Lisbon": just three of the mottos featuring on a ground-breaking yet made-up online service that aims to help women decide where to have an abortion outside Spain.

"We (women) should never have to find ourselves in a situation where we’re forced to make these choices," Gabriela Castro, a representative for advertising company DDB, told The Local.

She and her team have worked with women’s lobby group CELEM on setting up the website and temporary offices of Abortion Travel, 'the agency that should never exist' as their slogan says.

"None of our package deals can actually be purchased but the information contained in them, from hotel options to the cost of the surgical procedure, is all based on fact," Castro explains.

The controversial plan to ban women in Spain from freely opting for abortions overcame a key hurdle in February when lawmakers voted in secret against a motion to scrap the reform.

Women can currently have an abortion up to 14 weeks into their pregnancy but the planned changes by Spain’s ruling Popular Party would only allow it in cases of rape or if there is a threat to the mother's health.

"One of our creatives, very much against the abortion reform, came up with the idea for a website which would represent what will happen if the abortion law is passed," Castro told The Local.

"What it stands for is true, if women want to have a safe abortion, they’ll have to do it abroad."

Spain's Official Abortion Clinics Association (ACAI) announced in March that 30,000 backstreet abortions would take place in Spain every year if the tough new law goes ahead. Another 30,000 women would travel abroad for the operation.

CELEM are currently collecting signatures for an 'Abortion Travel' petition against Spain’s imminent abortion law, and can also be visited at their temporary Madrid offices at Calle Infanta Mercedes 32.