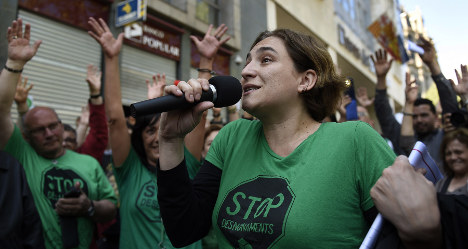 Ada Colau, co-founder of anti-eviction group Platform for Mortgage Victims, during a protest outside a branch of the Spanish Banco Popular bank in Barcelona on Wednesday. Photo: Lluis Gene/AFP

Dozens of demonstrators, many wearing matching green t-shirts, gathered at the doors of the branches of Spain's fifth-largest bank in the centre of Barcelona, chanting slogans against evictions and preventing clients from entering.

The Platform for Mortgage Victims (PAH), a grassroots movement campaigning to protect ruined homeowners, said it targeted Banco Popular because the lender has shown "very little will" to renegotiate the terms of mortgages held by customers who have hit hard times.

"It is the bank which has shown the least sensitivity and which systematically denies offering viable solutions to families," said a spokeswoman for the movement, Susana Ordonez.

The protests will continue until Banco Popular finds a solution for 13 "urgent" cases, she added.

Home evictions have become a stark symbol of the economic crisis in Spain sparked by the explosion in 2008 of a decade-long property bubble, with anti-eviction activists often rallying outside homes to prevent residents being turned out into the street.

Last year Spanish courts carried out 67,189 evictions of renters and mortgage holders — an average of 184 a day.

Spanish law allows banks to pursue a defaulting homeowner to pay back the whole of a mortgage loan even after surrendering the property, if the value of the home has fallen.

This is often the case in Spain where house prices have tumbled during the country's economic crisis.

The Platform for Mortgage Victims campaigned hard for a law to allow ruined homeowners to write off their mortgage debts by surrendering the property, and to guarantee social housing at affordable rent.

It handed a petition with 1.4 million signatures to parliament, which put the popular motion to a debate.

A version of the reform was eventually approved by parliament in April 2013, but with so many modifications that the movement were left disappointed.