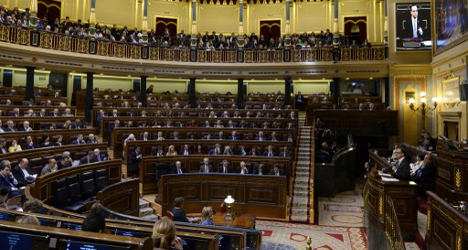 After a seven-hour debate, 299 MPs turned down Catalonia's request to be granted the right to call a referendum while 47 supported the petition and one abstained. Photo: Pierre-Phillpe Marcou/AFP

"I defend that Catalonia should remain in Spain because I can't conceive of Spain without Catalonia nor of Catalonia outside of Spain and Europe," Prime Minister Mariano Rajoy told the assembly before the vote.

His conservative Popular Party, the main opposition Socialists and the centrist Union for Progress and Democracy were determined to block the petition and the outcome of the vote was never in doubt but the Catalan authorities immediately vowed to fight on.

After a seven-hour debate, 299 members of parliament voted against the request by the Catalonia region to be granted the right to call a referendum while 47 supported the petition and one abstained.

The northeastern region, which has its own language and a long history of fighting for greater autonomy from Spain, had sought permission from the Spanish parliament to hold a referendum on November 9th.

Rajoy repeated his argument that the vote would be illegal, since under Spain's constitution, all Spaniards have the right to vote on whether a single region should be permitted to become an independent sovereign state.

The Spanish leader has warned that independence would be an economic disaster for both Spain and Catalonia, one of the country's most productive but also most indebted regions.

"Together we all win and separate we all lose," the prime minister told parliament.

Spain's Constitutional Court ruled last month that a region like Catalonia could not "unilaterally" call a referendum on its sovereignty.

But the Catalan government argues that a 2006 Catalan autonomy statute which was passed by Spain's parliament granted the region the power to hold referendums.

Catalonia's regional head of government, Artur Mas, has always vowed to remain within the law and he stressed after the vote that Tuesday's rejection was not final.

"From this painful 'no', the Catalan institutions will seek to build legal frameworks, and there are several, allowing for this November 9th ballot to take place," he said.

Mas has also threatened to call snap regional elections as a form of plebiscite on the struggle for independence.

The regional government faces strong pressure to push ahead with the referendum.

The group on Saturday unveiled a "roadmap", which calls for the region to declare independence from Spain by April 23, 2015 — the feast day of Saint George, the patron saint of Catalonia.

Last year on September 11th, Catalonia's national day, hundreds of thousands of people formed a human chain across the region to demand independence in a
rally organized by the group.

"It is not just a question of money, it has become a question of dignity," said 72-year-old pensioner Xavier Vivanco as he sat in a square in the city of Vic, in the heart of the most pro-independence province of Catalonia.

Proud of their distinct language and culture, a growing number of Catalonia's 7.5 million citizens resent the redistribution of their taxes to other regions and believe the region would be better off on its own.

The 2008 real estate crash that triggered a five-year economic downturn across Spain has added to the pressure for secession over the past two year.

"We have come in the name of a people, the Catalan people, who want and have always wanted to govern themselves," Jordi Turull, the representative of Mas's ruling conservative Convergence and Union, said at the start of Tuesday's epic parliamentary debate.

The European Union and NATO have warned that Catalonia — which has more people than Denmark and an economy rivalling Portugal's in size — would be excluded if it broke away from Spain.