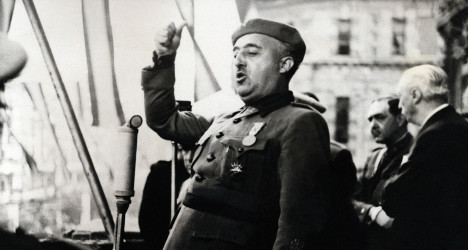 The street in the tiny Spanish village of Reíllo was called Generalissimo until 2008, but this was changed to Calle José Mondéjar (José Mondéjar Street), in honour of a former mayor.

Now, though, the current conservative mayor of the village with just 130 inhabitants has changed the street's name back.

It's a move opposition socialist PSOE party and other left-wing groups have slammed.

They believe calling the street Generalissimo — a title reserved for the long-serving dictator Franco — breaches Spain's Historical Memory Law. Under that legislation, symbols of Franco's Spain have to be removed from public buildings and spaces.

But Reíllo's mayor Pablo Campillo is unrepentant about scrapping the name honouring the village's former mayor.

"He (José Mondéjar) was a francoist mayor and did both good and bad things for the village and we don't think a mayor is better than anyone else, or should necessarily have a street bearing his name".

In the end "it's about the history of Spain" said Campillo of the 'new' street name.

"I was born in the 1980s and for me this is the history of Spain, in the same way as a street named (after the 15th century queen) Isabella I of Castile," he said.

The left-wing group Citizens for the Republic has called on provincial authorities to reverse the decision.

But Campillo says local residents have been "neither for, nor against" the move.