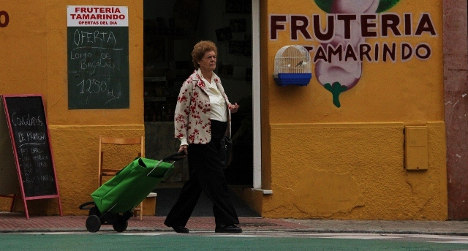 The world economy is booming with global growth set to hit 3.6 percent in 2014 and 3.9 percent in 2015, an upbeat IMF said on the launch of its latest World Economic Outlook report.

But the financial body also warns deflation could spoil the party for the eurozone. And this low inflation in Europe also poses a major threat to global economic health.

"The result (of deflation) would be premature increases in the cost of borrowing and higher real debt burden," the IMF said in their report released on Tuesday.

Spain also comes under particular fire in the report. While the IMF has revised up its growth forecast for Spain in 2014 from 0.6 percent to 0.9 percent, the heavily-indebted country is also the only one in the eurozone at "high risk" of deflation.

Consumer prices are continuing to slide in Spain. The national statistics institute, the INE, put this year-on-year fall at 0.2 percent in March.

That's the steepest annual drop since 2009, the Financial Times points out.

The latest IMF report, meanwhile, shows those prices in Spain are predicted to grow 0.3 percent in 2014, against an average of 1.1 percent for Europe's most advanced economies.

But Barcelona-based economist Edward Hugh told The Local that Europe's central bank has little room to manoeuvre on inflation.

"The main problem is that the inflation rate in Germany hasn't hit been as high as people hoped for, and this has pushed those rates down across Spain," he said.

"And with foreign investors keen to sink money into Europe's periphery the European Central Bank has its hands tied."

Hugh also sees devaluation in Spain as a inevitable consequence of calls for an internal devaluation in the country. Falling wages and falling property prices have both played a part in this lower inflation, the economist said.

The question for Hugh now is whether Spain is entering a period of prolonged Japan-style deflation, as the population ages. "But it's too soon to tell".

"But for those individuals living without debts, and for savers with their money on banks who may see better returns, the current low inflation can even be a positive," Hugh concluded.