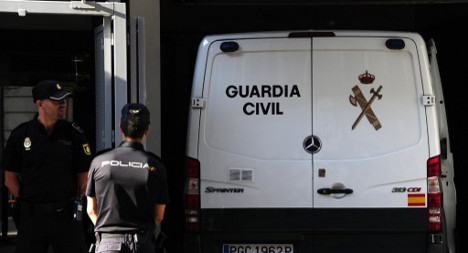 Following Lili Dai's suicide, her husband contacted Spanish police through a friend. The family was freed and the kidnappers arrested. Photo: Dominique Faget/AFP

The 40-year-old woman was getting used to her new suburban life in San Sebastián de los Reyes, a town on the outskirts of Madrid.

She’d escaped the nationwide manhunt she and her husband faced after cheating dozens of young couples and retirees out of their savings by selling them homes that didn’t actually belong to them.

Aside from the international arrest warrant a Chinese judge had issued, four men, presumed criminals, had taken it upon themselves to find the family of con artists.

It may never have been possible had it not been for an iPad given to Lili Dai’s daughter as a symbol of gratitude for the sale of one of the houses, Spanish daily El País reported.

The device’s tracking application helped the disgruntled ‘homeowners’ locate the family in Madrid and on March 4th 2013 the four men knocked on the door of the apartment where Lili Dai had moved her other relatives into.

“The men say they want the money, that they aren’t going to kill us,” Lili Dai’s daughter texted her mother, who was in the other family household in San Sebastián de los Reyes.

“I don’t know why these men are here, mother, save me.”

The kidnapped girl had had her mobile taken away by the kidnappers, but she managed to keep in touch with her mother via a gaming site with an email service.

“They want €3 million, but don’t come, they want to kill you,” the family grandmother wrote six days after being taken hostage.

Lili Dai and her husband Zhiwei Chen, a former monk, were so demoralized by the situation that they decided to take their own lives with what they thought would be a lethal overdose.

But when Zhiwei Chen survived the suicide attempt, he discovered his wife had hanged herself from the showerhead.

“I am going to die unjustly,” read the note she left behind.

The grieving husband then contacted José Luis Martínez, a real estate agent in Murcia he had done business with.

He in turn contacted Madrid police, who then proceeded to free the family and arrest the four kidnappers.

They are still in custody in Spain’s capital while a provincial court looks into the incident.

They have since been released and are awaiting extradition to their home country once Chinese authorities confirm they won’t be serving more than eight years in jail, the sentence they would serve in Spain.