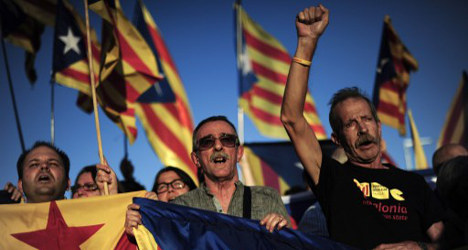 The parliament's rejection of the Catalonia's petition to be allowed to hold a planned November 9th vote on the issue of regional independence was convincing, but now it is time to address the underlying problems, Spain's El Mundo newspaper said on Wednesday.

The right-leaning national daily criticized the President of Catalonia Artur Mas for not attending the debate in Madrid, and said the deputies he had selected to represent the independence standpoint were not up to the task.

Marta Rovira with the Republican Left of Catalonia (ERC) party came under particular fire for her "naive" performance while the arguments of Spanish Prime Minister Mariano Rajoy and socialist PSOE opposition leader Alfredo Pérez Rubalcaba "were much more consistent" said the paper.

Rajoy on Tuesday repeated his argument that the vote would be illegal, since under Spain's constitution, all Spaniards have the right to vote on whether a single region should be permitted to become an independent sovereign state.

Rubalcaba was praised by El Mundo for drawing a parallel between elements of the Catalan community who believed the region would be better outside Spain and those in Europe who thought the EU would be better off without poor southern countries.

"Now is the time to turn to politics to confront the social divide in Catalonia and to reach an overarching agreement on coexistence," the paper urged.

Conservative newspaper ABC said Prime Minister Rajoy's speech during Tuesday's debate had been one of his finest performances.

The Spanish leader had not needed to resort to melodrama to put out the falseness of the Catalan position, the paper argued.

For left-leaning El País, the best outcome of Tuesday's vote was that it opened the door to dialogue between Madrid and Catalonia.

During Tuesday's seven-hour debate, Rajoy said the door was "wide open" for Catalonia to seek a change to the constitution.

The daily also highlighted comments from PSOE leader Rubalcaba on the need to kick off a "transparent, two-sided, participative and legal" conversation on how to reform Spain's federal constitution.

"For this path to be taken into consideration, the government and the (ruling) Popular Party would have to support it and that, unfortunately, does not seem to be on the agenda for the moment," it said in an editorial.

The paper also said that Spain's constitution shouldn't be treated as a closed book.  .

Catalonia's president Artur Mas, meanwhile, has come out fighting in the wake of Tuesday night's vote in Madrid.

"Mr Rajoy, set a date and a time. Could it be easier?," said the region's leader, calling for dialogue.

He called Tuesday's 'no' vote "painful" but said it wasn't an "end point".

"From this painful 'no', the Catalan institutions will seek to build legal frameworks, and there are several, allowing for this November 9th ballot to take place," Mas said.

Proud of their distinct language and culture, a growing number of Catalonia's 7.5 million residents feel the redistribution of their taxes to other regions is unfair and that the region would be better off on its own.

In 2013, the Catalan parties Convergence and Union (CiU) and the ERC launched an independence bid with Mas saying a vote on the issue of self-rule would be held in 2014.

The referendum would ask voters two questions:
– "Do you think that Catalonia should be a State, yes or no?"
– "If yes, do you want that State to be independent, yes or no.

Catalonia argues that a 2006 Catalan autonomy statute passed by Spain's parliament granted the region the power to hold referendums.

Tuesday's vote in the Spanish Parliament is, however, the latest rejection by Madrid of this argument.

Mas has previously threatened to call snap regional elections as a form of plebiscite on the struggle for independence.