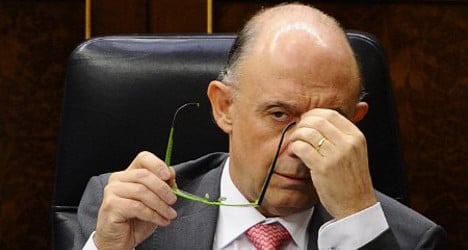 “Women are not happy when jokes like this are made at our expense,” an opposition party member has said of Montoro's gaffe. Photo: Pierre Phillipe Marcou/AFP

Cristobal Montoro told attendees at a business symposium on Monday afternoon how he planned to extend financial aid to working mothers in Spain with children under the age of three.

He told guests that working mothers would receive an income tax deduction of €100 a month.

“We are the only country that did this and now we are in a situation where we can try once more to introduce significant elements such as these in the tax system.”

What Montoro hadn’t realized is that the measure he spoke of is already in place in Spain.

Miguel Ferre, Spain’s secretary of state for finance, spoke to his superior in private to inform him of his blunder.

Then while taking part in a Q&A session, Montoro told guests: “The announcement that I have made is not exactly that, I’m sorry, I’ve not exactly triumphed here again.

Montoro dug himself into an even deeper hole when remarking: “We have a sexist tax in Spain – in the best sense of the word.”

Spain’s Finance Ministry later tried to make amends for Montoro’s “fail”, as he put it, by stating upcoming fiscal reform will include ‘new’ improvements for families and working mothers.

But Montoro’s political gaffe hasn’t been taken well by the opposition PSOE party.

“Women are not happy when jokes like this are made at our expense,” said Inmaculada Rodríguez-Piñero, socialist economic policy secretary.

The PSOE politician accused Montoro of tarnishing the image of Spain’s Inland Revenue with “a farce in very bad taste” and “his lack of seriousness and sensitivity with a subject as important as tax.”