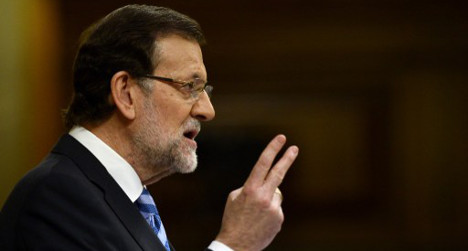 "What you are offering is the closest thing to a Robinson Crusoe island," a strident Rajoy told supporters of the planned vote in Catalonia. File photo: Pierre Phillipe Marcou/AFP

"Catalonia outside of Spain" is 'inconceivable', Prime Minister Mariano Rajoy said during the 40-minute discourse in the lead-up to Tuesday's parliamentary vote on whether the country's Catalonia region should be allowed to hold a vote on self rule.

"The right to decide about (Catalonia’s) political future belongs to all Spaniards," said Spain's conservative leader during the speech, a reference to the fact that the country's constitution states all Spaniards have the right to vote on whether one region can become a separate state.

"Voting is a democratic right, but ballots aren't enough to make a decision democratic. You need to respect the law for it to be a serious democracy," he stated.

Speaking about possible dialogue with Catalonia over independence, Rajoy said "Not even after 500 coffees could (Catalan President Artur) Mas and I go against the Constitution.

"What you are offering is the closest thing to a Robinson Crusoe island," a strident Rajoy told the supporters of a vote on the issue of an independent Catalonia.

"I can't conceive of Spain without Catalonia or of Catalonia outside of Spain and Europe," he added.
The vote to be held on Tuesday is expected to be a pure formality, Spanish press are reporting.

Some 86 percent of the country's MPs are expected to be vote against Catalonia's petition to be allowed to hold its referendum.

Catalan leader Artur Mas has not travelled to Madrid to take part in the debate.

Leaders of Spain's Catalonia region have called a November 9th referendum on the issue of self-rule.

Supporters of the planned vote in Catalonia have vowed it will go ahead regardless of how Madrid votes on Tuesday.