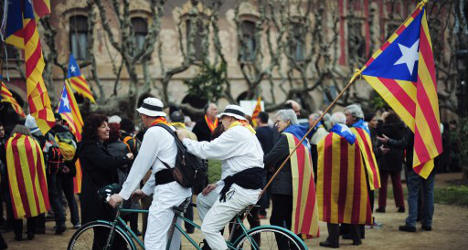 Pro-independence activists gather outside Catalonia's parliament during a vote for a petition to the national parliament, in Barcelona on January 16th. File photo: Josep Lago/AFP

Catalonia's president Artur Mas has vowed to go ahead with the referendum on November 9th even if Madrid rejects his request for the northeastern region to be granted the power to hold the ballot.

"If they say no, they will say no to a law. But they can't stop the will of the people of Catalonia," he told reporters on Sunday when asked about the looming vote in parliament.

The Catalan government's motion is fiercely opposed by Spain's ruling conservative Popular Party, which holds a majority in the parliament, as well as by the main opposition Socialist Party.

Prime Minister Mariano Rajoy has insisted the vote would be illegal. Under Spain's constitution, all Spaniards have the right to vote on whether a single region should be permitted to become an independent sovereign state.

The prime minister has also warned that independence would be an economic disaster for both Spain and Catalonia, which is one of the Mediterranean country's most productive but also most indebted regions.

Rajoy is backed by Spain's Constitutional Court, which last month ruled that the move by Mas and other Catalan political leaders to hold the referendum was unconstitutional.

Still, the regional government faces strong pressure to push ahead with the referendum.

"On November 9th, we will vote. We will not renounce the referendum, because it is our dignity that is at stake, the dignity of Catalonia," said the president of the group, Carme Forcadell.

The Catalan National Assembly on Saturday unveiled a "roadmap", which calls for the region to declare independence from Spain by April 23, 2015 — the feast day of Saint George, the patron saint of Catalonia.

On September 11th, Catalonia's national day, hundreds of thousands of people formed a human chain across the region to demand independence in a rally organized by the group.

This year the assembly plans to create another chain in Barcelona in the shape of the letter "V" for "Victory", exactly one year before the day it wants to hold a referendum on a new constitution for Catalonia.

The date commemorates the conquest of Barcelona by Spanish king Philip V's forces in 1714, which many Catalans say marked the end of centuries of autonomy.

Proud of their distinct language and culture, many of Catalonia's 7.5 million citizens resent the redistribution of their taxes to other regions.

The motion will be defended in the assembly by lawmakers from the Catalan president's ruling Convergence and Union alliance, or CiU, and its partners, the separatist Republican Left, or ERC.

Mas will not travel to Madrid to take part in the debate.

"I think lawmakers have a historic opportunity to amend the mistakes that were made by the State against Catalonia," said CiU parliamentary spokesman Jordi Turull ahead of the debate and vote.

Rajoy said on Monday he would like to resolve the crisis with Catalonia through dialogue.

"I never imagined anything else. I think we must talk," he said.

But speaking on Sunday the secretary-general of Rajoy's People's Party, Maria Dolores de Cospedal, repeated the argument that "sovereignty cannot be negotiated and it cannot be shared".

"Regarding Spain and the Spaniards it is all Spaniards who decide," she added.