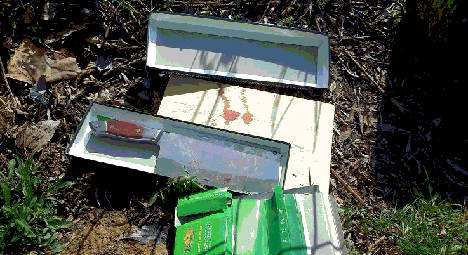 Photo of the butcher's knife and a bloodied chopping board used by the fraudster to chop off two of his digits. Photo: Mossos d'Esquadra

Mossos d'Esquadra police in the Catalan city of Girona were called to the scene by the off-duty policeman for what initially pointed towards a brutal attack or torture case.

They soon discovered that a man had been admitted to a nearby hospital only the day before for reportedly chopping two of his fingers off in a cooking accident.

Doctors attempted to stitch the missing digits back on to the man’s hand but too much time had passed for him to regain mobility.

Investigators then focused on how the two fingers and presumed amputation kit had mysteriously ended up in the middle of a children’s play area and not in the man’s kitchen as his statement would have suggested.

They discovered the Pakistani man had taken out six accident policies with different insurance companies, granting him more than €122,000 ($168,000) in total in case he did suffer an injury.

He had in fact already carried out a very similar scam successfully the year before, after he swindled two insurers out of €24,000 for injuries to his other hand.

The man, who has no prior criminal record, was released on charges on April 4th.