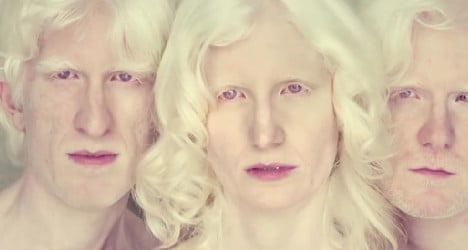 Latest calculations estimate there are as many as 3,500 albinos in Spain. Photo: YouTube

As many as 40 global experts in the field of albinism held talks over the weekend in front of a crowd of albinos and their families.

Together, they discussed the troubles sufferers face both at school and at work, notably in relation to their eyesight.

"Albinos have from five to ten percent of the visual accuracy of a person without the condition," CSIC researcher Lluís Montoliu tod Spain's main broadcaster RTVE.

"That means that in Spain, Europe and other countries around the world, albinos aren't allowed to drive."

Their poor eyesight causes them problems from an early age, with most having difficulties reading from the blackboard at school or even from their exercise book.

Albinos from the UK, France, Denmark, Turkey and many other countries discussed this issue in depth, as well as how it can affect their job prospects in later life.

Skin cancer is the other serious health issue they struggle with, the incidence of the condition being much higher among albinos due to the partial or complete lack of pigment in their skin.

Attendees called for sun cream to be covered by every country’s social security system, especially in poorer nations in Africa or Asia where products used to block ultra-violet radiation are considered an unnecessary luxury.

Although it is widely recognized that the most dangerous countries to be an albino are Tanzania and Burundi, where sufferers are often murdered in relation to black magic, social exclusion is still commonplace worldwide.

Latest calculations estimate there are as many as 3,500 albinos in Spain.

One in every 17,000 people in the world is said to suffer some degree of albinism.