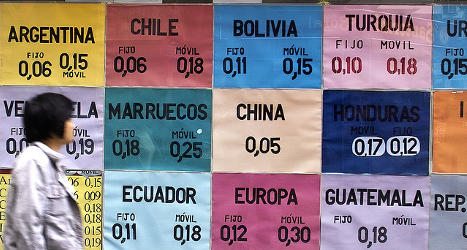 Users of Spain's phone shops (or 'locutorios') would also have to provide identification under the proposed law. File photo: Pablo Fernández

Spain's controversial draft Citizen Security Law has hit another stumbling block on its long road through the country's parliament.

A parliamentary committee signed off on a draft of the proposed legislation in November last year.

But the proposed legislation, which includes fines of €30,000 ($41,000) for staging demonstrations outside the country's parliament without permission, has come under intense fire since it was mooted.

Spain's powerful legal watchdog, the General Council of the Judiciary (CGPJ), have even said some of the proposals — including making the burning of the national flag a crime — could be unconstitutional.

The country's Data Protection Agency has also taken its red marker to the text.

Now the country's El Confidencial newspaper has shined the spotlight on another feature of the current draft of the law.

Under article 24 of the proposed bill, operators of Spain's internet cafés (or cibercafés) would have to note down their client's national identity (DNI) numbers before allowing them to use their services. The same applies to shops which provide phone services (so-called locutorios).

Customers who don't provide those details would see their access blocked, while businesses who fail to register details could be slapped with fines as high as €30,000 ($41,000).

A previous draft of the bill would also have required users of public Wi-Fi networks to register their details, but was scrapped after pressure from Spain's Ministry of Industry, Energy and Tourism.

The proposed move to make internet cafés register details is part of the fight against terrorism, El Confidencial says.

The move is also unlikely to draw attract more fans of the legislation. But  Spain's Interior Minister Jorge Fernández Díaz has stated the new law aims "to strengthen the guarantee of public liberties and security".