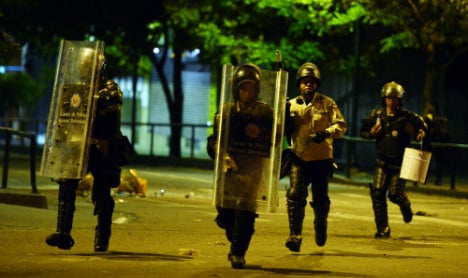 There was no longer any mood for reconciliation, Foreign Minister Jose Manuel Garcia-Margallo told reporters on the sidelines of talks with his 27 European Union counterparts.

Spain was in contact with officials "to try to re-establish a climate of reconciliation which has broken down", the minister said.

"It is a fact that we have suspended handing over police equipment," he added.

Madrid was paying close attention to the fate of some 200,000 Spaniards in Venezuela, 30 of whom are behind bars, he added.

The Harvard-educated economist is being held in a military prison since his February 18th arrest in the midst of an opposition protest rally against leftist President Nicolas Maduro, who has faced near-daily demonstrations since early February.

Thirty-nine people have died in clashes between security forces and protesters angered by soaring crime, high inflation and shortages of essential goods.

Another 608 were wounded and 192 are going through the court process.