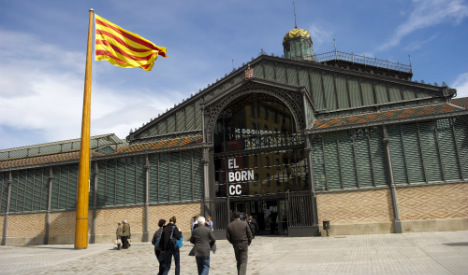 A huge red and yellow Catalan flag greets visitors to the Mercat de Born cultural centre, whose hulking skeleton covers what remains of the shops, taverns and houses in the Catalan capital's La Ribera neighbourhood.

Following the conquest of Barcelona by Spanish King Philip V's forces on September 11th, 1714, the neighbourhood — which accounted for one-fifth of the city at the time — was destroyed to make way for a citadel, and Catalonia was brought under direct rule from Madrid.

"Three hundred years ago, Barcelona and Catalonia fought for a better future. Today as well they want to live in freedom and in peace," reads a panel at the site which was inaugurated on September 11th last year.

With the Catalan government seeking to hold a referendum on independence on November 9th, the site has become a symbol of Catalan identity as well as the focus for commemorations of the 300th anniversary of the conquest of Barcelona.

Opponents of independence however say these commemorations are being used by Catalan separatists to advance their cause.

The independence movement has turned the 1701-14 War of the Spanish Succession "into a symbol of independence and the fight between Catalonia and Spain when in fact it was a European war between two dynasties", said Enric Millo, spokesman for the Catalan branch of Spain's ruling conservative Popular Party.

During that war, which ended with the conquest of Barcelona, Catalonia backed the losing rival claimant to the Spanish throne, archduke Charles of Austria, of the House of Habsburg, against king Philip V, from the House of Bourbon. "1714 has always been the symbol and date of Catalan nationalism. This year with the tricentenary, the date takes on special importance," said columnist and political scientist Josep Ramoneda.

"Like all founding myths, national or Catalan, it has a mixture of lies and truths," he added.

The walls of the rectangular Mercat de Born still bear the scars of the shells that rained on Barcelona during the siege of the city which pitted a local army against 40,000 French and Spanish troops.

It served as Barcelona's main market until 1971 when it closed.

The market was going to be turned into a library, but in 1994 the ruins of 18th century buildings that were demolished to build the citadel were found and Catalan officials decided instead to restore them and create a cultural centre dedicated to that period.

It now houses thousands of artifacts which were found at the site, along with models and videos that show what daily life was like at the time.

"You can imagine a city full of lights and colour, with streets full of shops and taverns, very refined, where all layers of society mixed," said Quim Torra, the director of the Mercat de Born cultural centre. For many Catalans the centre also serves as a reminder of an era when Catalonia enjoyed greater autonomy.

Before 1714 Catalonia "had its own currency, its own tax system, a parliament, its towns were run by local governments and Catalan was the official language," said Albert Balcells, a historian with the Institute of Catalan Studies.

But after the conquest of Barcelona that year, Philip V sought revenge on Catalonia for backing his rival claimant to the Spanish throne by suppressing its institutions and abolishing Catalan as the region's official language.

"This war and its consequences are the greatest calamity in the history of the city. The siege was a slaughter," said Toni Soler, the director of the tricentenary commemorations.

Still, columnist Ramoneda says the impact of the conquest of Barcelona was not a total loss.

"It is true that Catalonia lost a great deal, but there is also a degree of fantasy," he said.