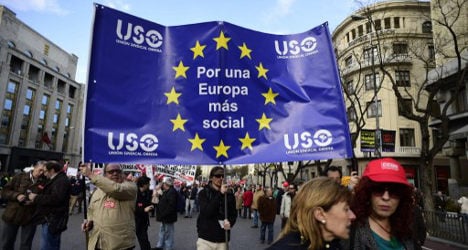 Protesters in Madrid on Thursday with a banner reading "For a more social Europe". Anti-austerity protests were staged in 54 cities across Spain. Photo: Javier Soriano/AFP

Rallies were staged in Madrid and 53 other cities by more than 100 organisations, including Spain's two largest trade unions, the CCOO and UGT, as well as groups representing health and education services.

Several thousand people, many waving red-and-white labour-union flags, marched through the streets of the Spanish capital behind a large black-and-white banner that read: "The austerity policies must end".

Retired civil servant Maria Cruz Otero, 67, said she was protesting because the cuts were affecting those worst off in Spanish society.

"With the so-called austerity it is the same people who are being left with nothing, those who already have little," she said.

Years of tax hikes combined with freezes and reductions in public-sector pay have caused a "brutal loss in purchasing power" for many people, she added.

The protests were held on the eve of a large demonstration planned in Brussels by the European Trade Union Confederation to demand the end of austerity policies in the European Union.

The confederation expects at least 50,000 workers from more than 20 European countries will take to the streets of Brussels to express their unhappiness with the economic policies being pursued in Europe.

The government says its painful reforms are delivering results after the economy emerged gingerly from recession in mid-2013.

Growth remains slow, however, and the unemployment rate still tops 26 percent as the nation struggles with the aftermath of a decade-long property bubble bursting.

Despite the difficult economic environment, Spain has promised the EU it will lower the public deficit to 5.8 percent of gross domestic product (GDP) this year, 4.2 percent next year and 2.8 percent in 2016.