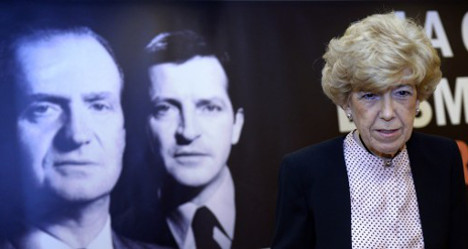 The palace rejected claims by popular historian Pilar Urbano that the king conspired to oust Suarez as prime minister and unwittingly set the scene for an attempted military coup in 1981.

Crowds of mourners lined the streets last month to honour Suarez, credited with steering Spain to democracy alongside Juan Carlos after the death of the dictator Franco.

Among a flood of homages, Juan Carlos called him a "loyal friend".

But Urbano said the king had turned on his political ally and tried to remove Suarez — without force — after bowing to pressure from disgruntled military officers.

Juan Carlos has long been credited with defusing the coup by armed guards who took lawmakers hostage in February 1981.

But Urbano said in her book "The Great Forgetfulness" that Juan Carlos had earlier connived with those same officers in a scheme to replace Suarez peacefully, dubbed "Operation Armada".

Eventually displeased with the king's choice of leader to replace Suarez, the same officers went a step further and launched a full-blown coup attempt, she said, citing various testimonies.

"One operation led to the other, but the coup happened without the king intending it," Urbano said at the book's launch in Madrid on Thursday.

"After the coup, Suarez thought the king had betrayed him and called him a traitor."

"The palace wishes to highlight the impeccable manner in which his majesty the king has always fulfilled his institutional obligations," the spokesman said.

It "roundly denies that he had any involvement in the so-called Operation Armada," he added.

Several people quoted in the book published an editorial in the conservative newspaper ABC denouncing the book as an attempt to "destabilize" the state.

Suarez's son, Adolfo Suarez Illana, demanded the book be withdrawn, accusing Urbano of the unauthorized use of a photograph in a book that "violates the honour" of his father.