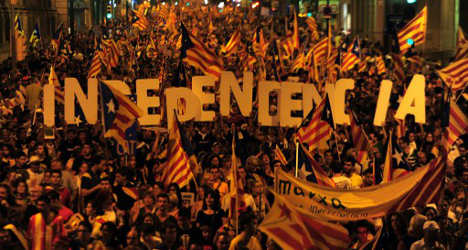 Leaders of Spain's Catalonia region have called a November 9th referendum on the issue of self-rule, but the central government in Madrid says the proposed vote is illegal. Photo: Lluis Gene/AFP

Among the risks highlighted are a flight of capital from the region, hyperinflation, a fall in exports, and a possible 30 percent drop in trade with the rest of Spain.

Tariffs and higher transport could also help "ruin many businesses in the most dynamic sectors of Catalonia's economy, the report's authors warned.

But the study's authors also highlighted the possible political consequence for the region if Catalonia unilaterally declared independence.

Spain would have the legitimate right "to defend the territorial integrity of the Spanish state in such a case", said study author and Professor in Economic Analysis at the Autonomous University of Barcelona Clemente Polo.

"The Spanish armed forces are charged with guaranteeing the sovereignty and independence of Spain," said Polo during the report's presentation in Barcelona on Thursday.

Leaders of Spain's Catalonia region have called a November 9th referendum on the issue of self-rule.

On Friday, Catalonia's Minister for Enterprise and Employment dismissed the IEE report saying it lacked credibility.

He said he only paid attention to "serious studies" and cited record Catalonia's booming foreign investment as counter evidence .

Catalonia saw foreign investment grow by 31.5 percent year-on-year in 2013 according to figures from the Spanish Ministry of Economy and Competitiveness.