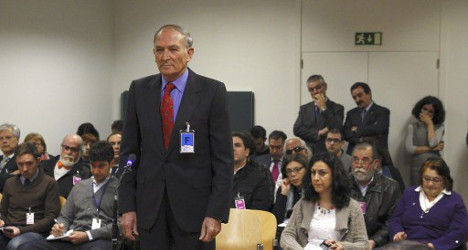 A federal judge in Argentina has issued an international arrest warrant for Jesús Muñecas Aguilar, 75, under a principle of universal jurisdiction, which allows courts to judge certain cases of human rights abuses committed in other countries.

Dozens of angry supporters of alleged victims of Franco-era abuses demonstrated nearby as Muñecas arrived for the hearing at the National Court in Madrid which must rule on the extradition request.

The former Civil Guard captain Muñecas, who also participated in a failed 1981 military coup in the early days of Spain's democracy, told judge Alfonso Guevara during the hearing that he opposed the extradition request and argued that he had "no links to Argentina", a court source told news agency AFP.

Spanish state prosecutors have also challenged the extradition bid — a sensitive affair in Spain where the wounds of the 1936–1939 civil war and ensuing dictatorship of Francisco Franco are still raw.

State prosecutor Pedro Martinez said that if Argentina wants to prosecute the suspects it should do so in the Spanish courts.

Muñecas is unlikely to be tried in Spain however because of a 1977 amnesty that was adopted to unify the country after Franco's death in 1975.

The charges lodged in Argentina allege that Muñecas and another policeman tortured prisoners in the late years of Franco's rule.

In Thursday's hearing Munecas's lawyer denied his client took part in torture and Muñecas spoke up to tell the judge he did not know the alleged victim, the judicial source said.

The demonstrators near the court were pessimistic.

"We are sure he will not be extradited," said one, Felisa Echegoyen, 66.

She says she was a victim of the other Spanish ex-policeman targeted by the extradition warrant, Juan Antonio González Pacheco.

González, alias "Billy the Kid", 67, has been summoned for an extradition hearing on April 10th.

In a controversial move, Spain recently scrapped its own universal jurisdiction provisions — a decision which means the shelving of cases including investigations into alleged torture at the US military prison of Guantanamo Bay in Cuba and possible acts of genocide by China in Tibet in the 1980s and 1990s.