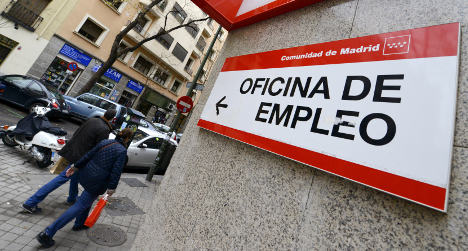 People walk outside a government employment office in the center of Madrid. Spain's unemployment rate tipped 26 percent in the final quarter of 2013. File photo: Gerard Julien/AFP

The number of people registered as unemployed fell by 16,620 from the previous month to 4.80 million in March, the steepest decline for March since 2006, the Labour Ministry said.

After correcting the data to smooth out seasonal fluctuations, the ranks of the registered unemployed fell by 17,000 people, the eighth straight month of decline, it said.

A decade-long Spanish property bubble imploded in 2008, throwing millions of people out of work, flooding the nation in debt and setting it on course for a double-dip recession.

A broader, quarterly household survey by the National Statistics Institute showed that Spain's unemployment rate topped 26 percent in the last three months of 2013.

Spain, which boasts the the eurozone's fourth-largest economy, emerged from the latest two-year downturn in mid-2013.

The economic expansion remains tepid, however.

Prime Minister Mariano Rajoy's conservative government is predicting economic growth of 1.0 percent in 2014 and 1.5 percent in 2015.