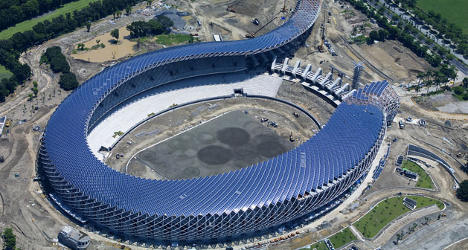 Having never made it past Spain’s third division, Balas Perdidas FC experienced a brief spell of ‘glory’ in 2009 after being bought up by local tenor Martes Tempestuoso.

The Benidorm underdogs, who famously signed English teen superstar Dwayne Maguire after paying his bail, made it into the quarter finals of the 2010 Spanish Cup before losing on penalties to Atletico de Madrid.

Despite their struggles to gain promotion, Tempestuoso continued to pump cash into the ailing squad by building a state-of-the-art 160,000-seater stadium, which fitted 10,000 more people than the next biggest stadium in the world and which was big enough to fit the entire population of Benidorm itself.

“We’ve set up a Lineker’s pub at the ground, serving everything from British fry-ups to pints of Stella, to draw in the English holidaymakers,” Tempestuoso announced at the time.

It didn’t take long for the architectural chef d’oeuvre to be marketed as a concert venue rather than a football ground.

Spain’s Football Association LFP fined the club €500,000 when two games had to be rescheduled to accommodate for Bob Geldof’s Flamenco Flashbacks Tour in 2011.

Then came Tempestuoso’s alleged affair with a reality TV star and a multi-million divorce settlement in his wife’s favour.

Unable to help the club out financially, the bankrupt opera singer looked to his close friend, Spain's former minister for the financial crisis, José Pescado, for entrepreneurial advice.

“José told me that despite being on a six figure salary as a consultant for Endesa, one of Spain’s longest standing electrical companies, he had secretly installed solar panels all around his Marbella mansion as a way of defying authority,” Tempestuoso told Spanish daily El Huevo.

The mischievous former minister was referring to Spain’s new ‘sun tax’, which sees people who don’t pay a levy on the power generated from their own solar panels slapped with fines of up to €60 million.

With his team being relegated to Spain’s 4th division and spectator numbers dropping to a measly 500 per game, Tempestuoso had the brilliant insight of turning the stadium into an enormous solar park, all without the necessary permits from Spain’s conservative government.

“I know I’m untouchable because José is my mate,” Tempestuoso famously bragged when journalists asked him about the numerous lawsuits filed against him.

The penniless tenor began covering the astronomical costs by singing at birthday parties and bar mitzvahs for New York’s elite.

A year after construction began, 4,000 solar panels have been installed on the pitch and stands of the Benito Camela stadium, enough to power Benidorm’s buzzing expat night scene.

With the promise that they’ll be able to return to their ground once Tempestuoso’s solar business has broken even, Balas Perdidas’ players are currently sharing a local dirt pitch with the under-10s.

Spanish PM Mariano Rajoy spoke about Tempestuoso’s disregard for the law in Spain’s Parliament on Monday, telling the defiant tenor to expect the €60 million fine in the post.

“Martes, I’ve told my wife to never play Nessun Dorma again if it’s you who’s singing it!” Rajoy shouted out in congress.