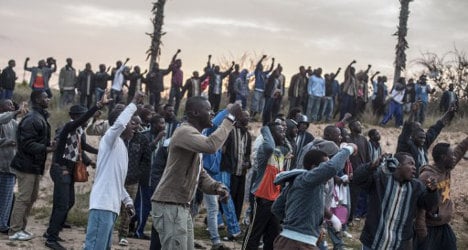 Would-be immigrants of the Centre for Temporary Stay of Immigrants (CETI) cheer other ones who want to cross the fence. Photo: Jose Colon/AFP

Some of them had serious injuries sustained during the assaults, aid workers said.

Their arrival from the north was the latest "forced displacement" by Moroccan authorities, despite Rabat vaunting its new migration policy aimed at dealing more humanely with the growing problem.

In the two separate incidents last week, between 800 and 1,000 migrants rushed the six-metre-high (20-foot) border fence at Melilla.

In February, 15 sub-Saharans drowned trying to swim from Morocco to nearby Ceuta, Spain's other North African enclave.

A network of 10 NGOs said that since December, Moroccan security forces have been relocating to Rabat at first dozens, then hundreds of migrants, who the groups are then left to look after.

"The actions taken by our organizations are inadequate to deal with what we consider a humanitarian crisis," the network said, adding that one of the NGOs, Catholic charity Caritas, had closed its office in protest.

"Since November, the reception centres have been overwhelmed by the number of migrants arriving… Some of those brought here have quite serious wounds," Vincent Sibout, the head of Caritas Morocco, told AFP.

"What we don't understand is that with this new, more respectful migration policy, which we welcome … They told us there would be a moratorium on arrests and deportations (to Algeria).

"But instead, displacements are taking place in the north in conditions that are not respectful of human rights," Sibout said.

Morocco is clearly struggling to cope with a rising tide of sub-Saharan Africans heading to its northern shores in their bid to reach Europe.

Its security forces have come under fire for beating, arbitrarily detaining and deporting the immigrants to Algeria.

In response to the criticism, Rabat announced that it would halt the deportations, vowed to strengthen the institutional frameworks for accommodating the estimated 30,000 people residing illegally on its soil and launched a scheme in January to "regularize" their papers.

Three new proposals — on the right to asylum, immigration and human trafficking — were presented in draft form to civil society groups last week in the presence of Migration Minister Anis Birou.

Birou said Morocco was becoming a settlement, rather than a transit country for immigrants, and insisted the government's response was "fundamentally based on human rights."

Rights groups say there have been some improvements since the new policy was announced, although only 300 migrants have so far been granted the residency permits that allow them to stay and work in Morocco — a small fraction of the 13,000 applications.

Juliet highlighted the contradiction between Morocco's desire to improve its rights image and the abusive treatment and forced displacement of immigrants.

It said the practice violated Spanish, European and international law, especially as "migrants forced back into Morocco face violence and other abuse at the hands of Moroccan security forces."

Abdelahi, one of those forcibly transferred to Rabat at the weekend, spoke bitterly of his expulsion from Melilla.

"After getting in, they tied our hands and sent us back. We saw how these Europeans make the laws and then trample all over them."

Another sub-Saharan, Abderrahman, said that after the Spanish authorities expelled him from Melilla in an earlier incident, the Moroccan security forces beat him and fractured his hand.

"They brought me to Caritas telling me they would help immigrants. (The charity) gave me some food and money for accommodation. But now Caritas is closed, there is nothing I can do."