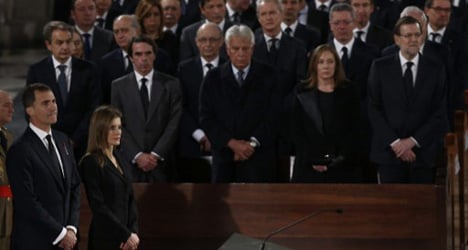 The funeral for former Spanish PM Adolfo Suarez was attended by members of the royal family plus past and present political leaders. Photo: JUANJO MARTIN / POOL / AFP

Foreign government envoys joined Spain's royal family and ministers who arrived at the cathedral under rainy skies along with members of the public to remember Suarez, who died on March 23, aged 81.

King Juan Carlos, Prime Minister Mariano Rajoy and other mourners swept up in cars to the gates of the grey stone cathedral, watched by hundreds of onlookers.

Other members of the public queued at a side door hoping for a last-minute seat in the mass, which filled the building with mournful organ music and hymns.

"He was the best leader we have had," said one of them, Fidel Carrasco, 72.

"If his successors had been like him, Spain would be in a better state than it is."

Among those invited from overseas were Britain's Deputy Prime Minister Nick Clegg, a US delegation led by Ray Mabus, Secretary of the United States Navy, and European Commission President Jose Manuel Durao Barroso.

Suarez, Spain's first elected premier after the death of dictator Francisco Franco in 1975, was admitted to hospital in Madrid on March 17 with pneumonia and died there a week later.

He had suffered from Alzheimer's disease for the past decade.

He was buried two days later in his home region, in the cathedral in the town of Avila, after his coffin was borne through the streets of Madrid.

But Monday was the day for the full state honours, with a funeral mass attended by Juan Carlos, Suarez's partner in the process of democratic reform known as the Transition.

Suarez had himself served as a member of Franco's regime, as head of the state broadcaster and a senior leader in the National Movement, a Francoist party with fascist roots.

But after Franco's death, the king chose Suarez, who enjoyed a reputation as a skilled negotiator, to lead the political process towards democracy.

Many Spaniards hail Suarez as a national hero for his democratic reforms and his unruffled stance during an attempted coup on February 23, 1981.

When soldiers firing their rifles in the air took members of parliament hostage that day, Suarez was one of only three lawmakers who did not hide under their benches.

In 1976 Suarez won Spain's first democratic elections since the dictator's death and went on to oversee the passing of Spain's constitution in 1978.

In time he was overwhelmed by splits within his party and other political perils, and resigned in 1981, having finally lost the support of the king.