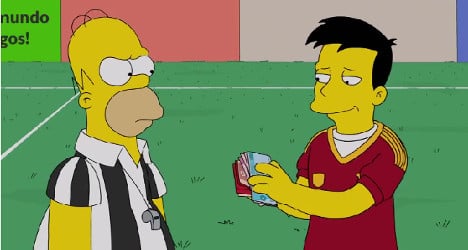 “Let me give that back to you,” the Spanish player tells Homer as he wraps the red card in several bank notes. Photo: 20th century Fox

Any publicity is good publicity, right?

But what if your countrymen are portrayed as corrupt in the field which brings them most joy?

The Simpsons’ scriptwriters have decided to take a subtle dig at Spaniards by alleging that bribes are all too common not off, but actually on the football field.

In an upcoming episode centred round Brazil’s World Cup, Homer referees a match between Spain and the host nation, only to be offered a wad of cash by a player he wants to send off.

“Red card!” shouts out a no-nonsense Homer as he hands out the booking.

“Let me give that back to you,” replies the Spanish player as he wraps the red card in several bank notes.

A toing and froing of red cards and money culminates in Homer shaping the pile into a ball and kicking it into the goal.

The other Spanish-flavoured episode is not quite as contentious.

The whole Simpson family travels to Pamplona in northern Spain, where they dress in the traditional San Fermines attire and get chased through the streets by a herd of angry bulls.

Even in emblematic opening credits where the family sits down on the sofa in front of the TV, a bull appears and gores the unlucky Homer.