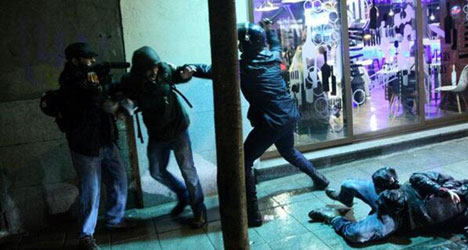 Seven journalists and photographers clain to have been struck with batons by police in what they described as an unprovoked assault. Photo: Twitter

The 'Put the King in Check' anti-monarchy demonstration, with around two hundred participants, was passing without incident down Madrid's Paseo del Prado on Saturday when police in riot gear began to chase a man they claimed had pushed them.

Photojournalists followed the police to record the arrest but found themselves on the receiving end of a violent beating that was caught on camera by demo participants and members of the press.

One of the photographers, Juan Ramon Robles, is the 2013 winner of the 2013 Ortega y Gasset prize for digital journalism and was working for Spanish newspaper El Diario at the time of the incident.

Robles told El Diario: "There was no tension until a boy confronted the agents because of their pushing and then ran away. A policeman chased him so we went too to record what was going to happen. That's when it started."

He explained that his colleague, Gabriel Pecot, who was working for Associated Press, was knocked to the ground and received a number of blows from baton-wielding officers.

When Robles and Mario Munera, who was working for the Ruptly agency, tried to intercede they were also struck in the body and head and pushed away.

"I was running to see what was happening and record it when I was struck on the right elbow. I almost fell to the ground and when I was getting my balance I was hit again on the other side. The last hit with the baton was when I was trying to get away, after he hit me on the back of my neck," said Munera.

Pecot said that the police's actions were "difficult to believe, completely gratuitous, because there was no tension, no objects being thrown."

He added: "Their reaction was completely at odds with what was happening after we'd been with them all afternoon at a peaceful protest."

The three claim that the attack on them was completely unprovoked and are collecting video and medical evidence with the intention of pressing charges.

Four other journalists have reported being struck by police during the incident.

FAPE, Spain's Federation of Journalists' Associations, expressed its outrage at Saturday's events on Twitter, and the National Press and Television Association of Graphic Reporters condemned the attacks in a statement in which it called upon the authorities to "investigate the facts to ensure that this does not happen again."

It noted that the officers had obscured their identification numbers under raincoats.