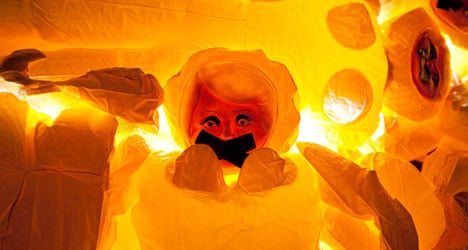 The used dolls are now available to anyone who wants to 'adopt' one. Gustavo Sanabria via Luz Interruptus

Luz Interruptus have joined many other groups and individuals in expressing their unhappiness with Spain's highly controversial draft abortion legislation.

But instead of marching, waving banners, baring their breasts or writing to their local politicians, Luz Interruptus have employed public street art to get their message across.

They taped up the mouths of a pile of sex dolls, installed lights, and left them on the steps of Spain's Ministry of Justice in Madrid.

The group's action has had the desired effect, attracting media coverage in sources including the US magazine The Atlantic.

The artists themselves described the action on their website, concluding with a give-away offer for anyone in the market for a used doll that lacks the usual wear and tear:

"Thinking about how women’s rights are being trampled by politicians and legislators, we decided to take to the street to demonstrate our opposition to the law, quite clearly intended to win votes from the more radical right.

"Loaded with half inflated plastic dolls into which we had placed lights and sealed their mouths, we went, one night in the month of March, to the front of the Ministry of Justice in Madrid and we placed our figures on the pavement like a carpet of female bodies ready to be trampled upon.

"The action was called Rights to trample on and it took us a couple of hours to carry it out. Afterwards we picked up everything so as not to leave the vicinity of the Ministry full of plastic, and now we have a lot of dolls in our possession, and we would like to give them away to anyone who wants to adopt one. If you would like one please contact us and we will get it to you." Women in Spain have had the right to freely opt for abortions up to 14 weeks into pregnancy since 2010.

But planned changes to the law will allow abortion only in cases of rape or a threat to the mother's health, making Spain the only country in Europe to impose such conditions.

Passage of the controversial bill through parliament has been delayed due to political infighting within the ruling right-wing Popular Party but it is expected to enter the statute books soon.