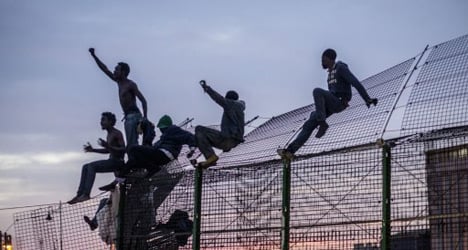 Évole, who was in the area to film an episode of his TV show 'Salvados', posted a short video, recorded on his phone, of sub-Saharan immigrants attempting to scale the metal fence that separates Spain from Morocco.

The video was one of many dramatic images captured by reporters in the area who witnessed the crossing attempts as the sun rose on Friday morning.

Civil Guard sources reported that a number of groups tried to cross the 10-metre fences at 4.30am.

Over the following three hours they repeatedly attempted to enter Spanish territory while chanting "Spain! Liberty!" and "Victory! Victory!"

Between ten and twelve people are estimated to have successfully made it over the border.

Officials were alerted at 4.50am and a combined operation began between Spanish and Moroccan forces, including deployment  of a helicopter and two units of the rapid intervention reserve security groups (GRS).

Police used ladders to bring the immigrants down from the fences and in one case a crane was needed to lower a man down from a streetlight.

5 immigrants were treated by the Red Cross for injuries according to press agency EFE.

Repeated assaults on Spain's border with Morocco by would-be immigrants have hit the headlines regularly in 2014.

Last week, Melilla President Juan José Imbroda was quoting as saying "We can't go on like this," by Spain's El Mundo newspaper.

The territories of Ceuta and Melilla sit across the Mediterranean from mainland Spain and are a key entry point for migrants seeking a better life in Europe.

Moroccan migrants help an African who has got into trouble attempting to swim to Ceuta on Wednesday. Photo: Fadel Senna/ AFP

We can’t yet say how many people entered Ceuta — we estimate between 8,000 and 10,000, and it seems 6,600 have returned to Morocco,” Mabel Deu, one of the city’s deputy leaders, told reporters on Friday.

Most of the migrants swam, but some came in inflatable boats, with Spanish government officials saying 1,500 of them were under 18. That figure has not been confirmed by the city.

“We don’t know how many minors came in,” Deu said. By Friday, Ceuta had 438 children and teenagers in its care at two ocations and was preparing a third, she said, acknowledging there were still “a good few hundred people wandering around the city”.

Those at the centres are registered, fed and clothed and given a place to stay after being tested for Covid-19. But many others are sleeping rough in parks or doorways, penniless and hungry.

Some came alone, while others crossed the border with friends or older siblings. Most are boys, either teenagers or in their early 20s.

“They told us they came to visit or that they were coming to see a football match with Ronaldo,” Deu said, accusing the Moroccan authorities of “manipulative tricks” to encourage the huge wave of arrivals.

Earlier this week, Ceuta officials admitted they were completely overwhelmed, appealing for a show of solidarity from Spain’s 17 regions.

“We cannot cope, there are too many children,” Carlos Rontome, another of the city’s deputy leaders, told Spanish national radio. “We are the frontier, we’re the breakwater, but we have limited capacities. We’re a small city of 19 square kilometres (seven square miles)… so it’s very difficult to absorb all these people. The only solution is to distribute them among the other regions.”

This week, Spain’s regions agreed to take in 200 unaccompanied minors who were already in Ceuta to free up space for the new arrivals.

“The problem cannot fall on (Ceuta’s) shoulders alone… The whole country must tackle the problem while taking into account the best interests of the
minor,” said Social Justice Minister Ione Belarra.

Save the Children said the proposal could ensure the youngsters were better cared for. “We believe that this measure could serve to alleviate the immediate pressure on Ceuta’s protection system while offering better care to these children,” Carmela del Moral, the NGO’s head of child policies, told AFP.

‘I dream of being a cleaner’

NGOs say they’ve been overwhelmed by the scale of need in Ceuta. “If we continue at this pace, it’s impossible: no NGO, nor the Spanish state nor any European state could cope with this amount of people,” said Abdesalam Mohammed Hussein, head of local NGO Alas Protectoras.

“We provide food and warm clothes, but we can’t reach everyone because there are just too many.”

An Arabic speaker, he says some youngsters said they went to the centres but found they “were full”, while others didn’t even know where they were.

Many say their parents have no idea where they are. “My mum must be very worried by now, because I was the only person earning so we could eat,” 16-year-old Omar Luriaghri told AFP.

But he can’t call her because she doesn’t have a phone. “Frankly my dream is to work here as a cleaner,” he said.

For now, Ceuta is focusing on tracing the parents. On Thursday, it opened a hotline for worried families which was swamped with “more than 4,400 calls” in the first 24 hours.

“Our teams are working morning, noon and night to find the families and ensure the child’s immediate return, because that’s what the parents and the
children want,” Deu said. “Many have been crying and wanting to go home since the first day.”

For some on the streets, desperation is taking hold, with Spanish police on Friday having to revive a young Moroccan who tried to hang himself with a
metal cable along the promenade.

“Sending children back is not legal and must not be tolerated,” said Ricardo Ibarra, head of the Children’s Platform, which groups 67 child rights NGOs, raising concerns about possible pushbacks — informal cross-border expulsions without due process.

But an interior ministry spokesman insisted all returns were being carried out “through legally-established channels” and said they did not have a breakdown of returnees by age group.

Social rights lawyer Albert Pares Casanova said each minor’s case must be examined individually “to see whether it’s best to return them to their families or (for them to) stay in Spain”.

It is Spain’s government “that ultimately decides whether they have to return or can stay here,” he told AFP. 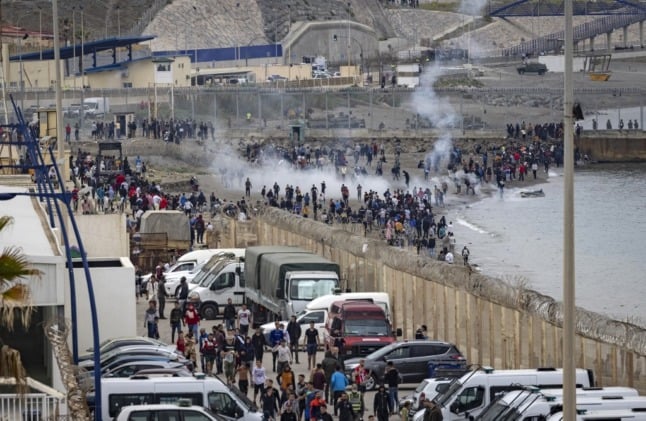 IMMIGRATION
IN IMAGES: 6,000 migrants swim across to Spain’s Ceuta in record crossing 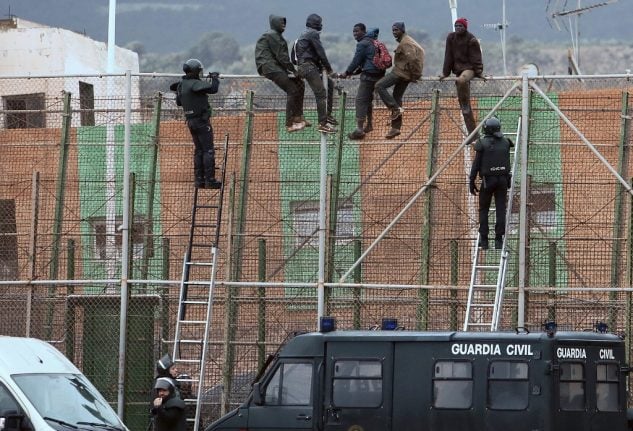