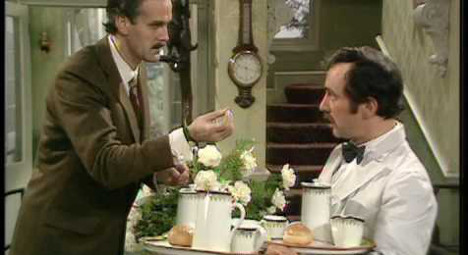 Manuel — the clumsy Spanish waiter in British comedy series Fawlty Towers — was turned into an Italian in the Spanish-dubbed version of the show. Photo: YouTube

What do Robert De Niro, Al Pacino and Sylvester Stallone all have in common?

Well, apart from being Hollywood greats, all three have the same voice in the Spanish-dubbed movies they star in.

Ricardo Solans, a legendary Spanish dubbing actor who has also given his voice to Micky Rourke, Charlie Chaplin and many others, is one of 30,000 voice-over artists in Spain.

“Do we want to hear Brando, Pacino or Meryl Streep in their own language?

“Let’s put an end to dubbing, it will be good for the film industry in our country.”

Skip to 1:01 to see how Manuel becomes Paolo (an Italian waiter) in the Spanish-dubbed version of Fawlty Towers

Saura has long been concerned that Spaniards are falling out of love with their home-grown cinema because when hearing American films dubbed into Spanish they immediately assume both industries have the same budget at their disposal.

“Dubbing should be completely banned and Spaniards should just get used to it,” he claims.

But Spain’s Cinema Federation argues audiences would drop by 35 percent if all films were kept in their original language.

The number of cinemas in Spain has already dropped to 841 in 2012 from 1,223 a decade earlier, according to culture ministry figures.

Enrique González-Macho, President of Spain’s Film Academy, thinks the dubbing ban would “sink Spanish cinema”, arguing that “if people thought it that important to watch movies in their original language, they would, but they don’t”.

Spain’s film industry is already embroiled in a “cultural war” with the government, having seen state funding drop by 12.4 percent from the previous year.

Add the 30,000 voice-actors who would have to join the dole queue if dubbing into Spanish was deemed unnecessary, and it seems even less likely to happen.

And amid all this scandal, perhaps the strangest thing of all is that no mention whatsoever has been made by key political and cultural figures about the benefits of being exposed to another language through film.