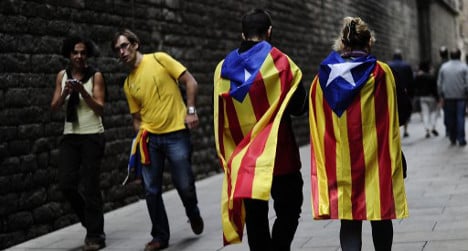 The Catalan government has already set November 9th as the date for the referendum. Photo: Josep Lago/AFP

"We have to vote. If they want, on the day of the referendum they can bring tanks to Catalonia but we are going to vote all the same," said the 20-year-old after signing a petition in central Barcelona in favor of the referendum.

The Catalan government has already set November 9th as the date for the referendum — two months after an independence vote in Scotland that has been authorized by the British government.

But Spain's Constitutional Court on Tuesday ruled "unconstitutional and null" a declaration by the Catalan regional parliament which claimed Catalonia had a sovereign right to hold a vote on its future.

The court upheld a legal challenge to that declaration by Spain's national government, which argues referendums on sovereignty must be held nationally and not regionally.

"For me, the Constitutional Court ruling doesn't change anything," Cots said, however.

"Catalonia is a nation due to its history, its language and its different culture. We have a right to vote whether they like it or not."

He was one in a steady stream of people that included pensioners, young families with children and tourists who visited a stand set up in Barcelona's Catalonia Square by the Catalan National Assembly, a powerful pressure group, to gather signatures on the petition.

The petition urges Catalonia's political leaders to "do as much as they can, that they exhaust all of the paths open to a referendum".

The group has not revealed the total number of signatures it has collected so far, but said that over the weekend of January 11th-12th it gathered over 200,000 at booths set up across Catalonia, which is home to 7.5 million people.

"People are very excited because we have never been so close to achieving it," said Maria Lluisa Forcadell, a 55-year-old volunteer who staffed the stand on Catalonia Square.

The stand was decorated with the Catalan independence flag, which features red and yellow stripes and a white star inside a blue triangle.

"You can't negotiate anything with Madrid. They have made their response clear. So we have to press ahead even if it is outside of the law," said Sergi Codina, 32, a restaurant manager, as he signed the petition.

"It is not a pro-independence drift by a government. There is a parliamentary majority that is behind it and above all a majority of the population that does not stop demanding this referendum," he added.

Proud of their distinct language and culture, many in Catalonia say they feel short-changed by the central government which redistributes their taxes.

Spain's economic woes, with 26 percent unemployment and drastic public spending cuts, have sharpened this feeling, prompting calls for independence to grow louder in the past two years.

On September 11th, Catalonia's national day, hundreds of thousands massed in a vast human chain stretching across the region to demand independence.

The event was organized by the Catalan National Assembly which has published a "route map" calling for the region to declare independence on April 23rd, 2015.

"We pressure the Catalan government and political parties to work towards independence because we believe it is better and the only solution for Catalonia," the group's president, Carme Forcadell, told Agence France Presse.

Catalan leaders have vowed to press ahead with the region's drive for independence.

"Politicians can't turn back now, it would be a total failure. We have to press ahead even if it is unconstitutional," said Manuel Gonzalez, a 63-year-old pensioner, as he signed the petition.

"If they want they can throw us all in jail but first they will have to find one big enough to hold us all," he added.