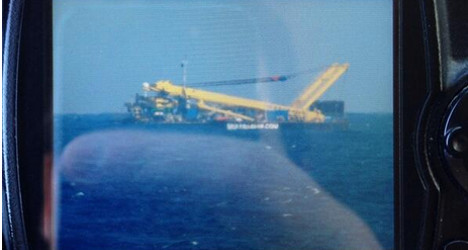 The tug boat that was mistaken for a downed plane. Photo: Twitter (NoSoloSurf @javicelard)
Reports that an airplane had crashed into the sea off Spain's Canary island of Gran Canaria are a "false alarm", Spanish officials have said.
Spanish media reported on Thursday afternoon that a crash had occurred two miles off the island, near the town of Jinamar, and that rescue services were heading to the scene.
But Spain's airports association AENA have since said that a boat had been mistaken for a plane.
Local media have blamed the confusion on a tug towing another vessel.
Screenshot of the tweets sent out by Canary Emergency services, first confirming the plane crash and then suggesting it was in fact a tug boat.

Here's a picture of the tugboat emergency services thought was a plane.
Coincidentally, the 'non-accident' happened on 27th anniversary of the worst airline accident in history, when 583 people died after two 747 airliners collided on the runway in Tenerife's northern airport of Los Rodeos.
The "false alarm" news has taken Twitter by storm, with some commentators mocking how the Canary Government managed to confuse a plane with a boat.

A little help for #Canaries emergency services. Plane is the one at the top #notaplanecrash pic.twitter.com/14RjIkS73r

Falsa Alarma – my favourite headline of the day. The plane was actually a boat that was shaped like a plane #canaries http://t.co/dWllP51f1A

How can a boat be mistaken for a plane ? a reported plane crash off Canary Islands was in fact a boat doh someone didn't go to Specsavers!!!