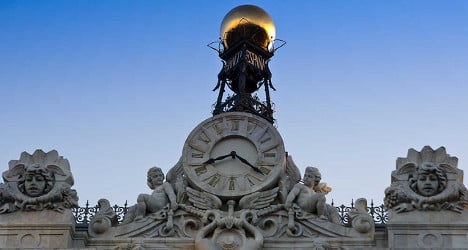 Both Spain and Portugal are poised to see their economies grow by 1.2 percent this year, the banks forecast in separate reports.Photo: photouiscmg/Flickr

Both countries are poised to see their economies grow by 1.2 percent this year, the banks forecast in separate reports.

In Spain, the eurozone's fourth-largest economy, the central bank said it expected a gradual, modest recovery ahead but warned that unemployment rates would remain stubbornly high.

Following a 1.2-percent contraction last year, the central bank said it was tipping gross domestic product growth of 1.2 percent this year and 1.7 percent in 2015.

If correct, that would mean Spain is set for the fastest economic growth since 2007, just before a property crash plunged the nation into five years of stop-start recession, wiping out millions of jobs and plunging the nation's banks, companies and consumers deep into debt.

Growth would not be strong enough, however, to make a big dent in the unemployment rate, which topped 26 percent at the end of 2013.

The Bank of Spain predicts the unemployment rate will ease to 25.0 percent this year and 23.8 percent in 2015.

In another sign that countries on the periphery of the eurozone are slowly getting back on their feet, the Portuguese central bank sharply hiked its forecasts for growth.

The bank said that growth in the bailed-out country was set to be 1.2 percent this year instead of 0.8 percent estimated previously.

The upgrade came at a critical moment for Portugal which is preparing to emerge from its bailout programme on May 17 and to return to financing itself with loans from the sovereign bond market.

Portugal has been regaining the confidence of financial markets and the interest rate it has to offer to attract 10-year loans has fallen to below 4.2 percent, the lowest rate since March 2010.

The central bank said that growth next year would rise further to 1.4 percent compared with a forecast in December of 1.3 percent.

In 2016, the economy would grow by 1.7 percent, the central bank said in its spring report, with growth driven by household spending and exports.

However, as in Spain, the impact on the job market in Portugal would be gradual, it warned.

The International Monetary Fund and European Union rescued Portugal from the threat of bankruptcy in May 2011 with loans of 78 billion euros ($108 billion).

But this help was tied to a programme of tough structural reforms which weighed heavily on economic activity and household spending.

In common with other bailed-out eurozone countries — notably Greece and Ireland — Portugal is working not only to correct its public finances but also to raise efficiency in a bid to achieve an export-led recovery.

Ireland is achieving this, and Greece has also made progress.

The government in Ireland predicts that the economy will recover well this year and Greece last year posted its first current account surplus since 1948.