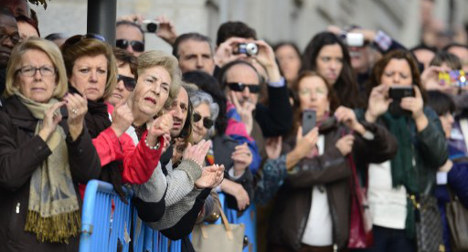 Spaniards of all ages have waited outside the parliament building for up to 5 hours to pay their respects to former Spanish Prime Minister Adolfo Suarez. Photo: Gerard Julien/AFP

Some 30,000 people have flocked to the lower house of parliament in Madrid where Suarez's flag-drapped coffin has been lying in state since Monday at noon, the president of the parliament, Jesus Posada, told reporters.

"What people want are people like Adolfo Suarez, who work for Spain," he said before the doors to parliament were closed at 10:00 am on Tuesday ahead of Suarez's funeral.

The queue stretched at one point for up to five kilometres (three miles) from the doors of the lower house of parliament as mourners waited in the cold and rain for hours to bid farewell to the late prime minister, who died on Sunday aged 81.

The former prime minister's coffin will be moved later on Tuesday morning to Avila where he will be buried in the city's cathedral.

Suarez, Spain's first elected premier after the death of the dictator Francisco Franco in 1975, died in a Madrid hospital after suffering from Alzheimer's disease for the past decade.

He had been admitted March 17 with pneumonia.

Suarez was a leading player in the delicate dismantling of the dictatorship followed by democratic reforms that he and King Juan Carlos helped to achieve after Franco died — a process known as the "transition".

Flags across the country were at half-staff as Spain declared three days of mourning.

A state funeral will be held on March 31 in Madrid's Almudena Cathedral.