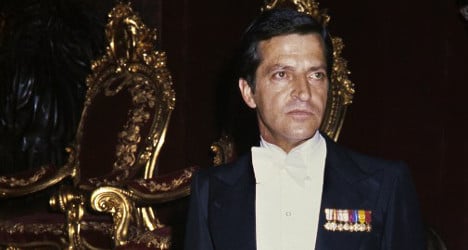 Suarez, Spain's first prime minister after the death of General Francisco Franco in 1975, had suffered from Alzheimer's disease for the past decade. Photo: STR/AFP

"Adolfo Suarez has died," the spokesman Fermin Urbiola told reporters at the Cemtro hospital where the former premier was admitted Monday.

Suarez, Spain's first prime minister after the death of General Francisco Franco in 1975, had suffered from Alzheimer's disease for the past decade.

His son Adolfo Suarez Illana told reporters on Friday that his father's illness had progressed and his death was "imminent".

Suarez was one of the last surviving players in Spain's historic "transition" — the delicate dismantling of dictatorship followed by democratic reforms that he and King Juan Carlos helped achieve after Franco died in 1975.

"His role in the transition was second only to that of the king," said the historian Javier Tusell.

Despite being born the son of a Republican, Suarez became a member of Franco's regime, serving as head of the state broadcaster and a senior leader in the National Movement, a Francoist party with fascist roots.

The king, Franco's successor as head of state, named Suarez prime minister in a new government in 1976 at the age of 44, and he was confirmed as leader in an election the following year.

"The king's relationship with my father has always been exceptional," Suarez's son said.

"Together, they changed the course of history."

A charismatic leader admired for his talent for conciliation, Suarez oversaw the legalisation of political parties and helped them forge a consensus as they hammered out a constitution, approved in a referendum in 1978.

In time he was overwhelmed however by various perils: splits within his party, Spain's economic hardship, a dissenting military and regions, and armed attacks by the Basque separatist group ETA.

In 1981, two years after being elected for the second time, he resigned unexpectedly. Days later, soldiers took members of parliament hostage in an attempted coup that was defused with the help of Juan Carlos.