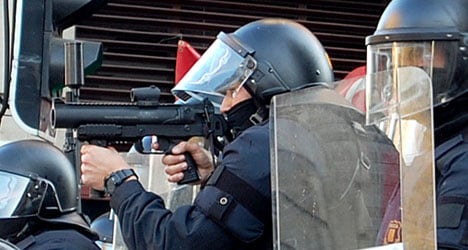 The use of rubber bullets by riot police in Catalonia has been banned after an incident in which a woman lost her eye. Photo: Flickr/Nicolás Soto

Gabriel R.S. had come to the Spanish capital from Palencia, in the north-northwest of the country,  to march alongside tens of thousands of people in the '22-M' protest against Spain's unemployment rates and economic crisis.

Saturday's peaceful demonstrations took a turn for the worse in the late evening when violence flared between groups of youths and riot police.

Police claimed that groups of youths initiated the confrontations by throwing projectiles but some observers have accused the police of unprovoked attacks.

Others, including Gabriel, say that police infiltrators dressed as march participants instigated the violence which led to them opening fire on the crowd with rubber bullets.

Gabriel, who was one of 101 injured people admitted to hospital, told Spanish newspaper El Diario, "I don't know who started it but they went for us. We began to defend ourselves with stones and whatever we could find to hand."

He told Spanish daily 20 Minutos that "I wasn't even in the area where it all started."

"The rubber bullet hit me directly, it wasn't fired at the ground to dissuade people. I didn't even see it, I just felt it," he said.

Doctors at the Gregorio Marañon hospital removed his left testicle and Gabriel told reporters that his remaining right gonad was "damaged and painful".

He said that he was concerned about the effect on his fertility "because I'm young and want to have children one day."

According to Gabriel, no-one from the police or government has yet contacted him.

He hopes to be released from hospital on Monday and has stated his intention to "speak with lawyers who were there at the protests who've offered to help me."

This is not the first rubber-bullet controversy to affect Spain's police forces.

Officers in the country's North African enclaves of Ceuta and Melilla were advised to stop using the weapons following the deaths of a number of illegal immigrants who were shot at while attempting to swim to shore.

And Catalonia's Mossos police will be banned from using rubber bullets after April, following an incident in which Ester Quintana lost an eye after being shot by police during demonstrations in Barcelona last year.