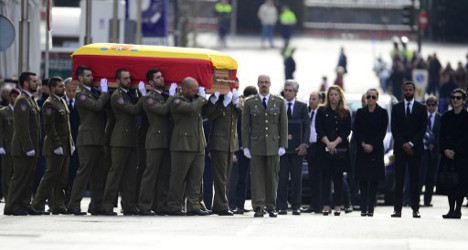 Hundreds of onlookers applauded as eight soldiers wearing white gloves carried his flag-drapped coffin into the parliament building where in 1981 Suarez stared down an armed coup attempt.

Prime Minister Mariano Rajoy and his three predecessors — Jose Luis Rodriguez Zapatero, Jose Maria Aznar and Felipe Gonzalez — stood at the entrance to the parliament building as the coffin arrived.

Suarez, Spain's first elected premier after the death of General Francisco Franco in 1975, died at the age of 81 on Sunday at a Madrid hospital after suffering from Alzheimer's disease for the past decade.

He was one of the last surviving players in Spain's historic "transition" — the delicate dismantling of dictatorship followed by democratic reforms
that he and King Juan Carlos helped achieve after Franco died.

Many Spaniards hail Suarez as a national hero because of his democratic reforms and his reaction to the attempted coup in 1981, which was defused with the help of Juan Carlos.

"He is the best head of government Spain has ever had," said Dolores Carmona Gonzales Caballo, a 68-year-old pensioner who watched the coffin
arrive.

King Juan Carlos, supported by a cane after undergoing a hip operation in November, and Queen Sofia paid their respects to the former prime minister's family at the parliament before the doors to the assembly opened to the general public.

The monarch, Franco's successor as head of state, on Sunday hailed Suarez as "a loyal friend" in a televised address.

Juan Carlos had named Suarez prime minister in a new government in 1976 when the lawyer and politician was 44. The following year Suarez won Spain's first democratic elections after Franco's death.

A charismatic leader admired for his talent for conciliation, Suarez oversaw the legalization of political parties, including the Communist Party which had been persecute under Franco, and helped them forge a consensus as they hammered out a constitution, approved in a referendum in 1978.

"He knew how to talk to his enemies," said 64-year-old Maria Jesus Fernandez at the parliament.