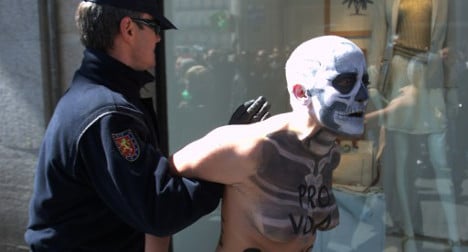 A police officer prevents a Femen activist disguised as a skeleton from interrupting an anti-abortion demonstration in Madrid on Sunday. Photo: Curto de la Torre/AFP

The five Femen members shouted out "Pro-life is genocide" as they interrupted the anti-abortion march in Madrid's emblematic Puerta del Sol square on Sunday morning.

As usual, the feminist activists appeared topless as part of their protest modus operandi, but this time they also painted their faces and upper bodies in black and white to replicate a skeleton.

Bystanders vented their anger towards the women as police officers arrested the repeating offenders for public indecency.

Organizers of the ‘Sí a la vida’ demo, "Yes to life" in English, claimed as many as 100,000 people took part in the march, while police estimated the figure was no more than 6,000.

"We need 280,000 children that are the victims of abortion to live as part of our generational replacement."

A controversial plan to ban women in Spain from freely opting for abortions overcame a key hurdle in February when lawmakers voted in secret against a motion to scrap the reform.

Since the draft law was published, thousands have rallied across Spain to voice their support and disapproval for the government's stringent abortion plans.

Bare-breasted feminists belonging to the exhibitionist protest group Femen have already staged other protests against the new abortion law.

In early February, Femen members hurled underwear at the archbishop of Madrid as he arrived at church on Sunday as a way of voicing their disapproval against the church’s and the government’s view on abortion.