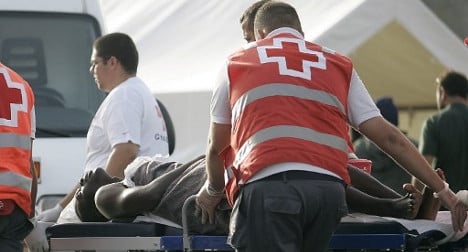 The type of meningitis bacteria the man is suffering results in death in 10 percent of cases. File Photo: Desirée Martín

The man is being treated at Melilla’s Hospital Comarcal, where he is being kept in isolation and is currently hooked up to a mechanical ventilator.

His situation is critical yet stable after he experienced acute retroviral syndrome and septic shock while in hospital.

Medical staff at the temporary refugee centre where the 19-year-old fell ill have so far vaccinated 226 other people to prevent the spread of meningitis.

These include the doctors who first treated him and all those who shared a room with him.

The type of meningitis bacteria involved in the current case — meningococcus — is rare in Spain but much more common in African's Sahel region.

Death occurs in around 10 percent of cases.

Since the start of the year, Spain has experienced a very high influx of sub-Saharan immigrants attempting to enter its borders through the country’s African enclaves of Ceuta and Melilla.

On February 6th, 15 migrants drowned in Moroccan waters while trying to swim to Ceuta from a nearby beach.

The government admitted using rubber bullets but denied its forces had targeted the migrants directly.

Spain's Interior Ministry has since described the situation in the Spanish enclaves of Ceuta and Melilla as a "state of emergency" with huge numbers of migrants — the record being 1,600 on March 4th — attempting to get into Spain on an almost daily basis.