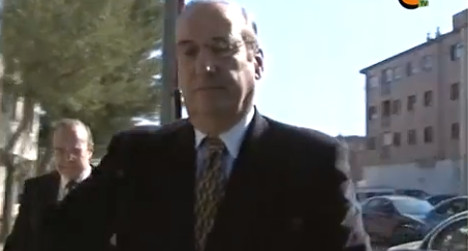 Francisco Franco Martínez-Bordiu, 59, the oldest grandson of the late dictator and a regular in Spain's gossip columns, is charged with dangerous driving and an attack against authority.

He was questioned by a judge in the town of Calamocha in northeastern Spain for two hours, a court spokeswoman said.

According to a complaint lodged by a police officer involved in the car chase, Guardia Civil officers on April 30th, 2012 spotted Martínez-Bordiu driving near Calamocha in the dark without any lights.

When they signalled for him to stop, he instead picked up speed and jumped several stop signs before ramming a patrol car, running it off the road.

Martínez-Bordiu, a businessman and one of seven children by Franco's only daughter Maria del Carmen Franco Polo, denies being in the vehicle that rammed the patrol car.

His lawyer Felix Martin told reporters that on that day Martínez-Bordiu had loaned his car to a former Romanian employee who "probably" no longer lives in Spain.

It is the latest in a series of brushes with the law experienced by Franco's heirs, who ruled Spain with an iron fist from 1939 until his death in 1975.

Martínez-Bordiu, who published a book about his grandfather, was charged in 2009 with assaulting a railway employee at a train station in Zaragoza in northern Spain after he missed his train.

He was acquitted after the employee who accused him of striking her failed to show up at his trial.

His younger brother Jaime Martínez-Bordiu was given a one-year suspended sentence in 2009 for beating his then girlfriend Ruth Martínez at a hotel in Mijas on the Costa del Sol.