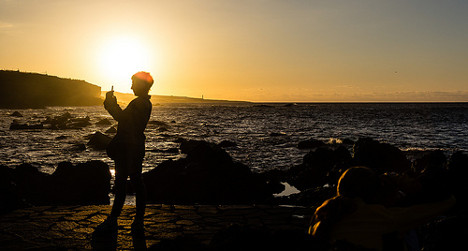 Some 6.2 million foreign visitors landed on Spain's shores in January and February, up 11.8 percent on the same period in 2013 the tourism ministry figures show.

The Canary Islands were the big winners with nearly one in every three tourists heading to the archipelago off the coast of Africa.

Arrivals at Lanzarote's Arrecife airport were up nearly a quarter in the first two months of the year, after a 2013 in which the island saw its best tourist figures in over a decade.

January and February saw a total of 321,191 foreign tourists visit Lanzarote, with the British — the island´s largest market — accounting for almost half of all arrivals.

"Accessibility and affordability are the key components at play," Richard Eales, the UK-born Managing Director of Optima Villas Lanzarote told The Local.

"Lanzarote is the closest winter sun destination to the UK, at just four hours flying time. And increased competition on these main routes from the budget airlines has driven flight prices down significantly over the last two to three years," he added.

But not everyone in Spain is smiling.

Tourist numbers in the Balearic Islands in February were down 15 percent year-on-year, largely because of a drop in the number of Germans visiting the islands, local daily Diario de Mallorca reported.