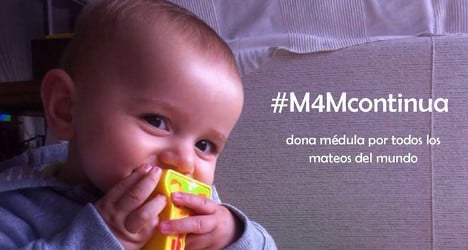 Mateo Schell is at the centre of a high-profile social media campaign in Spain. Photo: Facebook

When the family of baby Mateo learned last year that the two-month-old needed a bone marrow transplant, they took matters into their own hands.

Using the hashtag #medulaparamateo (bone marrow for Mateo), the Schells decided to launch a social media campaign to find a compatible donor.

This included setting up the Medula Para Mateo campaign website to inform people around the world about how to register with their national donor banks.

Over a million people visited the site with thousands signing up to become a possible donor for the sick child. The family's campaign even won the backing of Real Madrid's Sergio Ramos who appeared in a video highlighting Mateo's plight.

And on Wednesday the family could finally announce on their Facebook page that a suitable donor for little Mateo had been found.

"Thank you for everyone's efforts over the last few months, thanks for your solidarity, your support, and your actions in making people aware (of Mateo's situation)," the family wrote.

"At the start of April our superhero will undergo a bone marrow transplant…please send us lots of positive energy for (Mateo) and his donor".

The identity of the donor — found through the Bone Marrow Donors Worldwide, which tracks donors around the world — remains a mystery, but he or she has "high compatibility", the baby's uncle Ricardo Schell told Spanish news agency Efe.

But Mateo's delighted family aren't planning to give up their social media activity.

They have now launched #M4Mcontinua hashtag with the aim of finding bone marrow donors for other sick people around the world.

"Mateo is a name that represents anyone who needs bone marrow and we will keep making people aware of how easy it is to become a donor," the baby's uncle said.

The #medulaparamateo campaign hasn't been without its share of controversy.

In January, the Spanish Government banned donor campaigns based around individuals, saying decisions about who would receive transplants rested with the country's National Transplant Organization (ONT).

The move was more about stopping private organizations from becoming involved in organ transplant 'trading'.

Ricardo Schell has previously stated that the new rules don't affect campaigns like #medulaparamateo which is about drawing attention to the cause of people needing transplants.

The family has also said Mateo himself will stay out of the limelight.

"Neither he nor his mother has appeared in the media," María de Andrés, who is Mateo's mother's cousin, told Spanish national daily El País.

"We only put a few (new) pictures of him on Facebook because we have involved a lot of people and because when we started he was only two months old, and he has changed a lot," de Andrés added.

Spain is a world leader in organ transplants, with the number of donors increasing from 14 per million people in 1989 to 35 per million in 2011.

That puts Spain far ahead of other countries, with 26 donors per million people in the United States, 25 in France and just under 15 in Germany, according to Spain's National Transplant Organization (ONT).

But only 0.2 percent of people in Spain are registered as bone marrow donors, a situation the ONT is working hard to change.