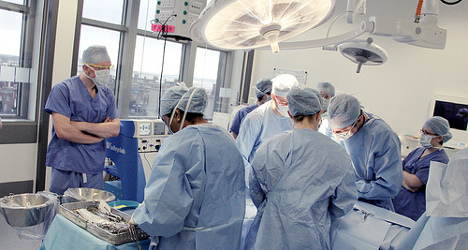 " I gritted my teeth so hard that one broke” said Alcocer who lost consciousness during the ordeal." UCD School of Medicine & Medical Science/ Flickr

"Either we cut you or your son dies," doctors told Maria Mercedes Alcocer, an Ecuadorian woman living in Spain.

The soon-to-be mother had been admitted to a hospital in the northern Spanish region of Asturias 32 hours earlier after her water broke.

But during her time in hospital, nurses were worried that she had not started to dilate. She had also developed a serious infection which in turn had given her a very high temperature.

The 37-year-old woman was rushed to the delivery room.

Doctors told her there was not enough time to call an anesthesiologist and she reluctantly agreed for them to cut her stomach open and save her son"s life.

"I gritted my teeth so hard that one broke,"

Despite losing consciousness, doctors were able to save the child's life.

Since recovering from her ordeal, the disgruntled mother has decided to file a lawsuit against the hospital.

She and her husband Cristian, who the newborn is named after, fear that their son may have been left physically or mentally effected during the difficult childbirth.

"He didn't get enough oxygen (because the umbilical chord was tied around his neck)," Alcocer added.

The Ecuadorian women says doctors informed her that she was likely to experience problem during her pregnancy and childbirth, and prepared accordingly.

"For nine months, I did everything I was told. I ate yoghurt, which I detest, rested, walked, and underwent all the tests recommended for pregnant women my age. I did not skip a single thing. "

Alcocer claims no one at the hospital has yet explained what actually happened during her childbirth.

"So much suffering is inhumane, you cannot play with the life of the people.”