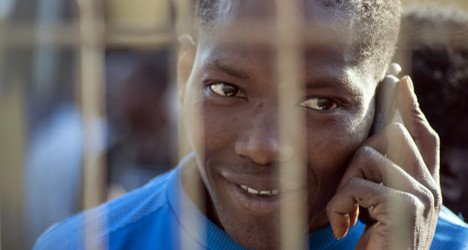 A young man at the Centre for Temporary Stay of Immigrants (CETI) on the north African Spanish enclave of Melilla on Wednesday. Photo: Blasco Avellaneda/AFP

The decision to reinforce the border comes a day after some 500 sub-Saharan Africans illegally entered the Spanish city — the latest in a series of such crossings.

"We can't go on like this," Melilla President Juan José Imbroda was quoting as saying on Tuesday by Spain's El Mundo newspaper.

He called for drastic action for a problem that was worsening by the day.

Melilla forms one of Europe's only two land borders with Africa, along with another Spanish territory, Ceuta, to the west.

The two cities sit across the Mediterranean from mainland Spain, surrounded by Moroccan territory, and are a key entry point for migrants seeking a better life in Europe.

The government admitted using rubber bullets but denied its forces had targeted the migrants directly.